Circle Chart (formerly known as Gaon Chart) has revealed its chart rankings for the week of November 13 to 19!

EXO’s Chen topped this week’s physical album chart with his new solo mini album “Last Scene,” which debuted at No. 1.

Meanwhile, the Nemo version of Jang Min Ho’s latest album “ETERNAL” climbed to No. 2 on the chart.

VERIVERY claimed two of this week’s top five spots with their new single album “Liminality – EP.LOVE.” The regular version of the album debuted at No. 3, while the META version charted separately at No. 5. 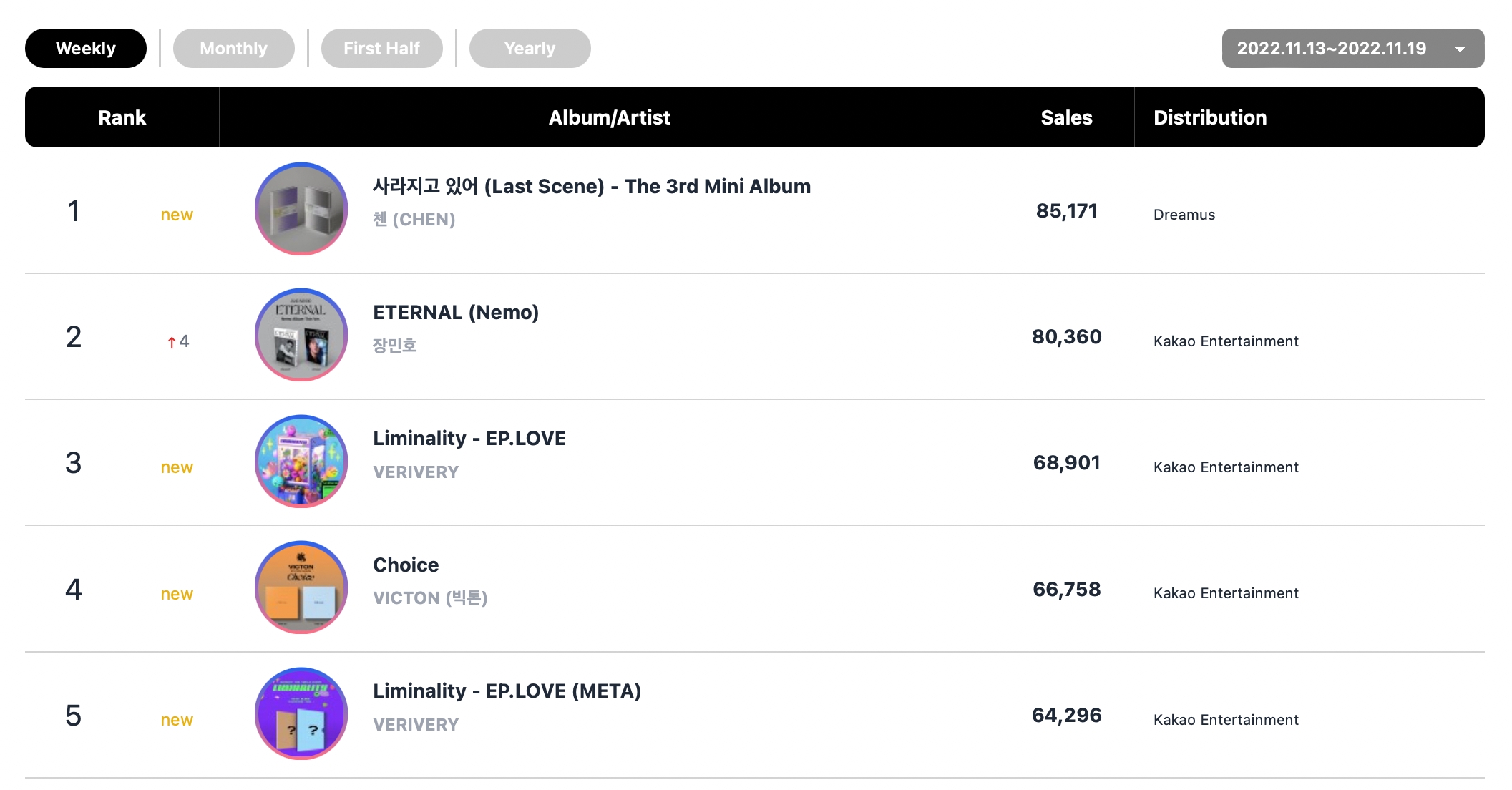 Younha maintained her double crown on this week’s Circle charts, topping both the overall digital chart and the streaming chart for a second consecutive week with her viral hit “Event Horizon.”

Lim Young Woong swept the next two spots on the overall digital chart, with his songs “London Boy” and “Polaroid” debuting at No. 2 and No. 3 respectively. 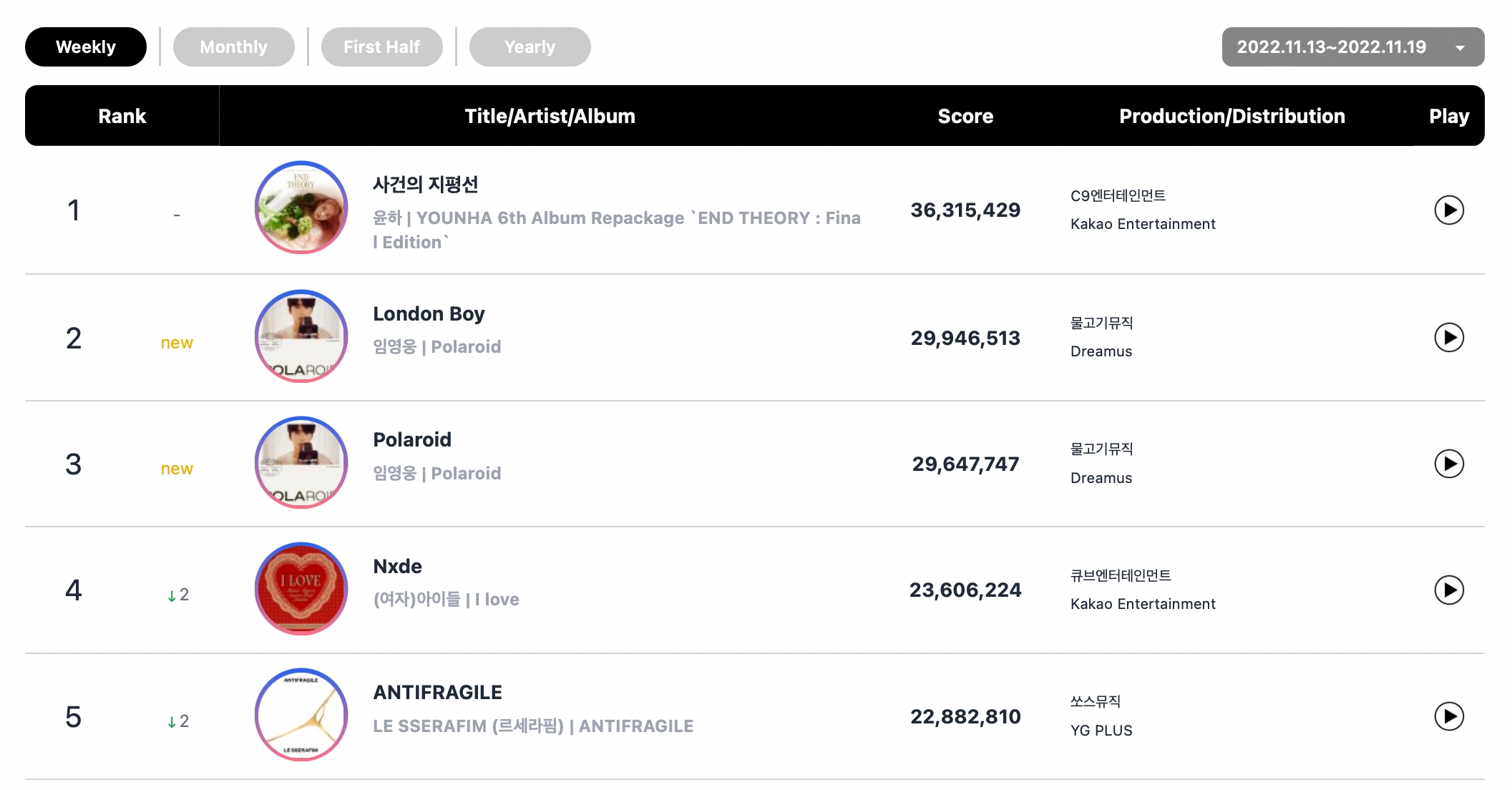 The top four songs on this week’s streaming chart were exactly the same as last week: Younha’s “Event Horizon” remained No. 1, with (G)I-DLE’s “Nxde” at No. 2, LE SSERAFIM’s “ANTIFRAGILE” at No. 3, and Block B’s Zico’s “New thing” (featuring Homies) at No. 4.

Finally, NewJeans’ “Hype Boy” rose to No. 5 for the week. 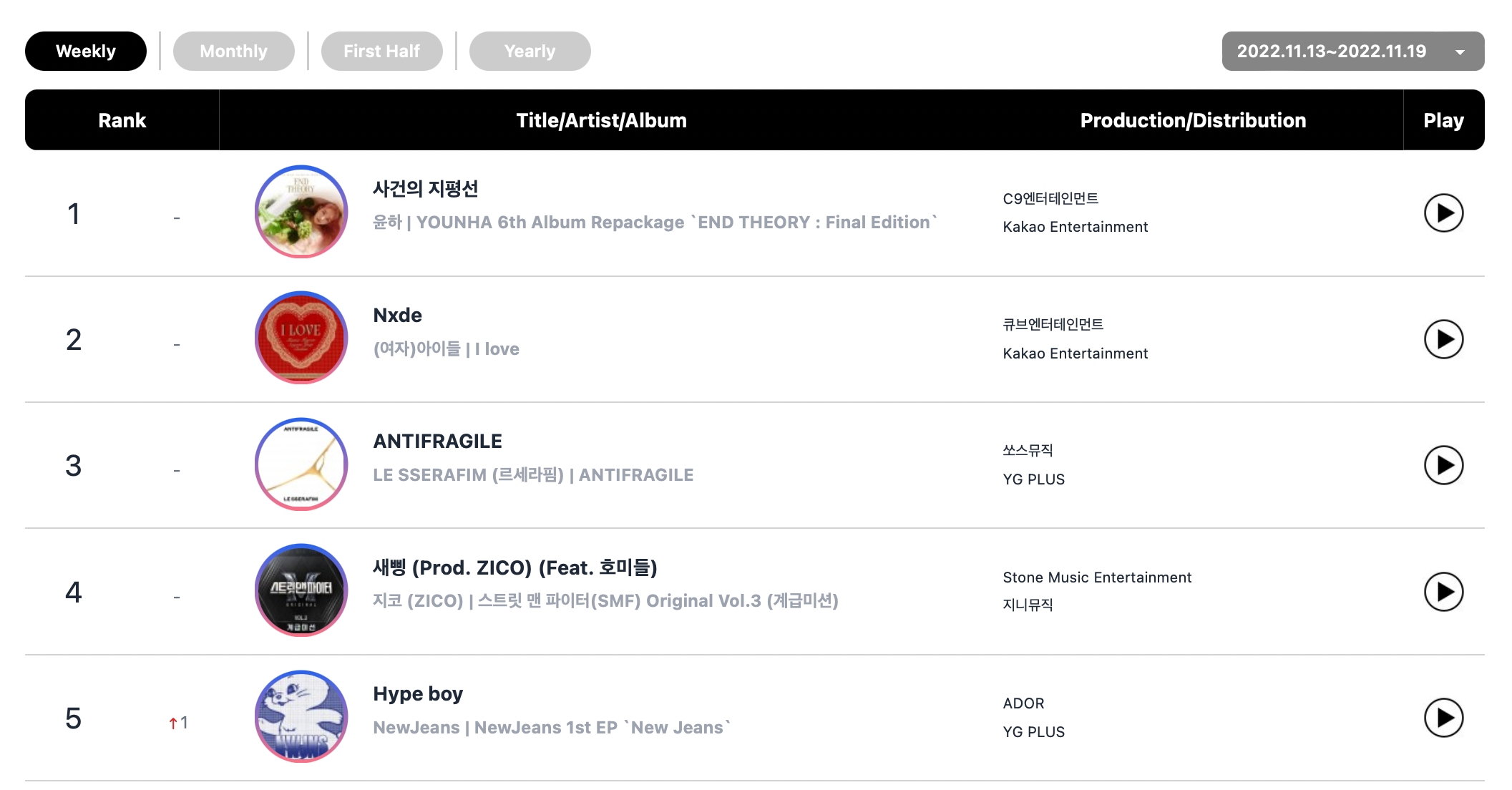 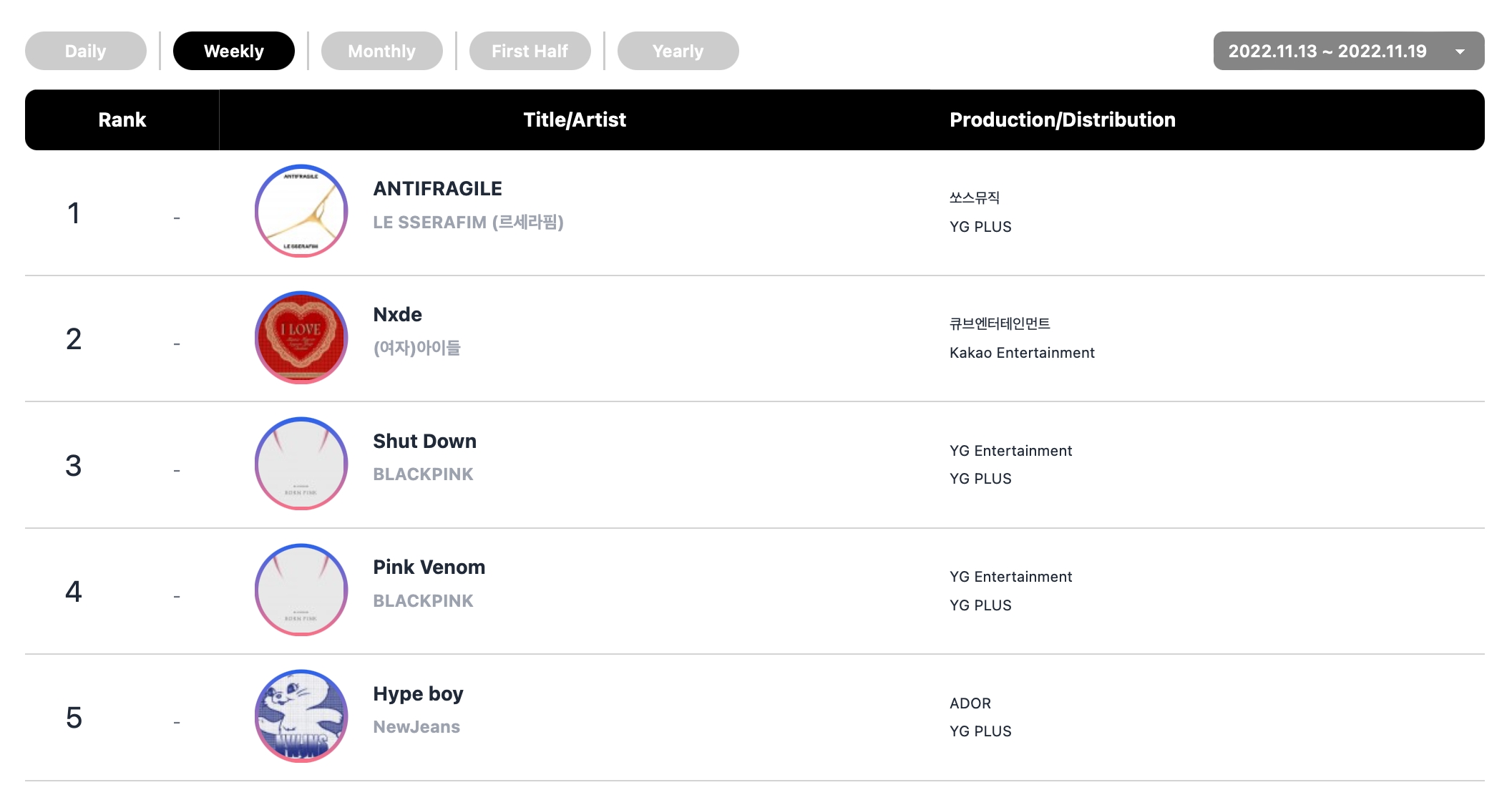 Lim Young Woong swept the top two spots on this week’s digital download chart, with “London Boy” and “Polaroid” debuting at No. 1 and No. 2 respectively. 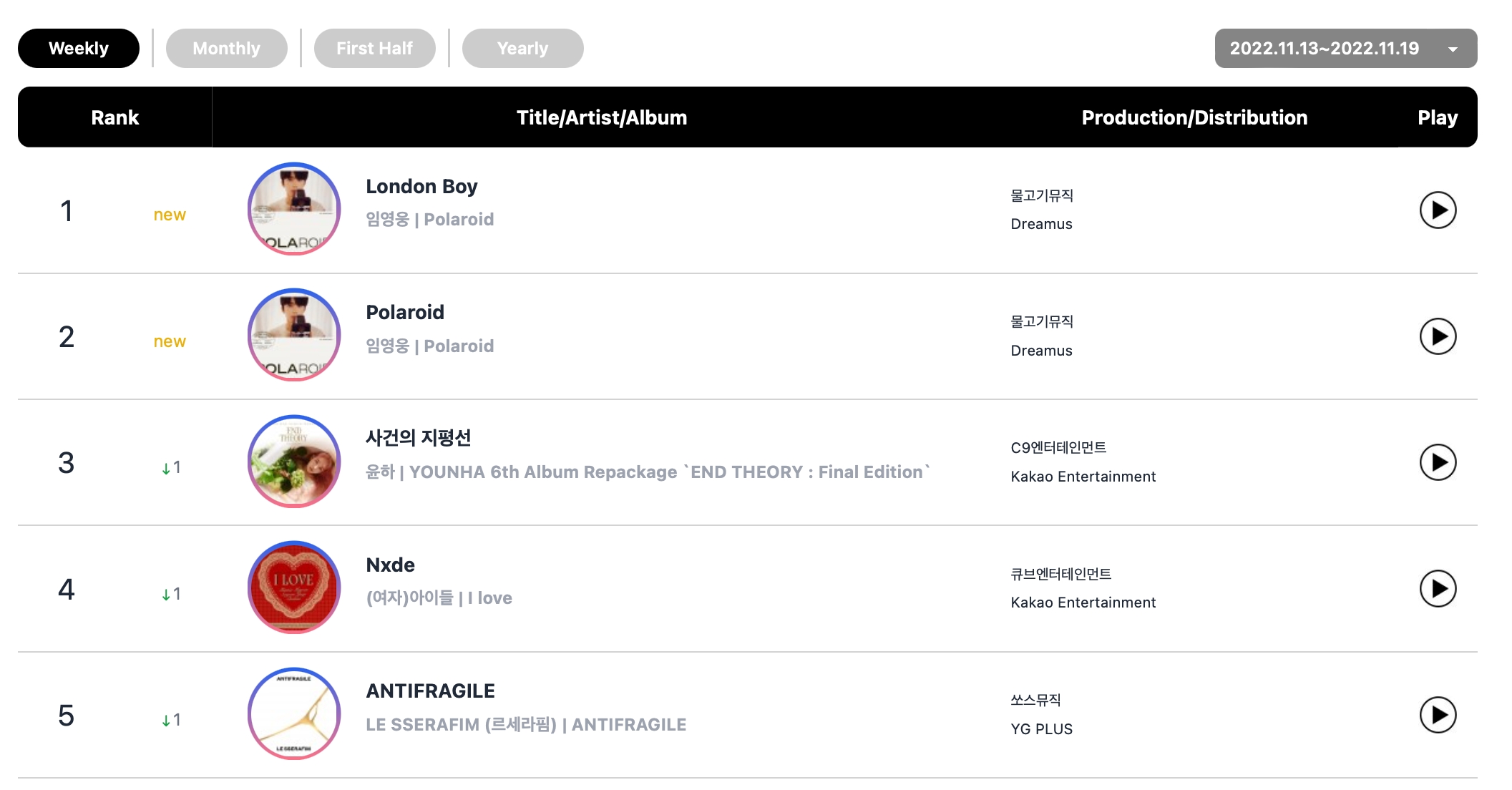 BLACKPINK defended their position at No. 1 on the social chart this week, with BTS remaining No. 2 and Lim Young Woong holding steady at No. 3.

LE SSERAFIM climbed to No. 4 for the week, and (G)I-DLE rounded out the top five. 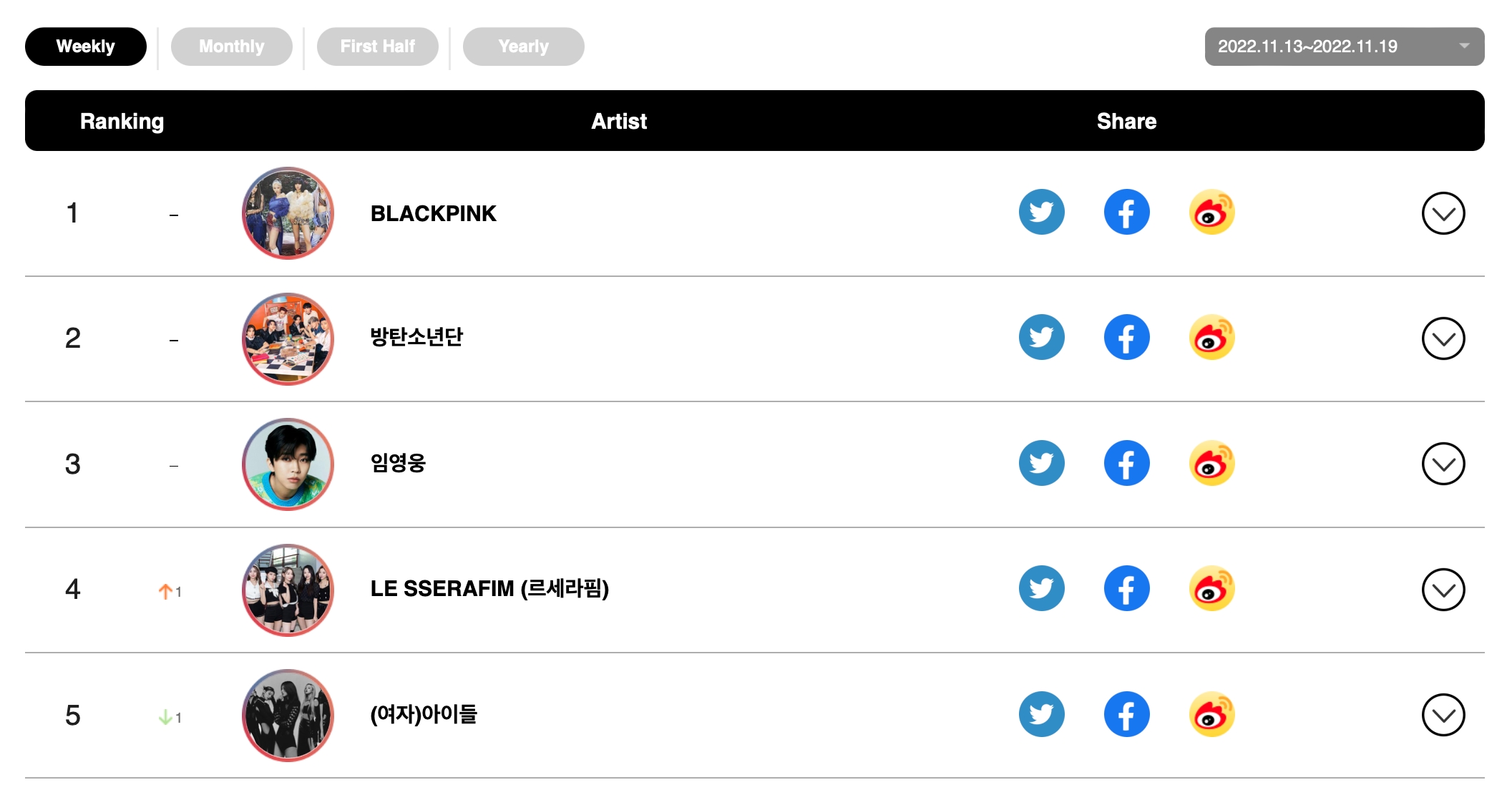