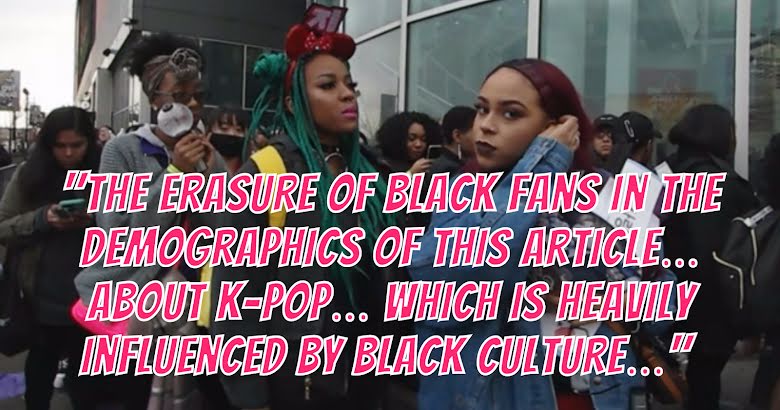 Black K-Pop fans are calling out HYBE‘s Weverse for their recent article.

Weverse Magazine recently released an article titled “K-pop in America after BTS What’s the meaning of K-pop in the US these days?.” It highlights K-Pop in the U.S. after BTS‘s successes and cultural impact.

Yet, many were upset and offended by the article, and for good reason.

“K-pop in America after BTS What’s the meaning of K-pop in the US these days?” also talks a lot about diversity, providing statistics of people groups that listen to K-Pop. Asian, Hispanic or Latino, and White are the only ones mentioned, though. Black and Indigenous are both excluded.

Likewise, later in the article, it talks about helping just white and Asian women “to build a positive self-image.” Again, Black and Indigenous are ignored as well as Hispanics this time. Yet, the entire paragraph is supposed to be about race and ethnicity.

Naturally, Black Americans were upset reading the article recognizing the erasure of an entire demographic.

Based on that Weverse article, no one’s in this picture 🫥🤷🏾‍♀️ https://t.co/HSixQgnwwk

When the statistics provided in the article are added up, 21.2%, a large percentage, is unaccounted for. The math was certainly not mathing.

It’s problematic enough that such a large portion of K-Pop fans was not recognized. But the fact that Black American music and culture have had such a huge influence on K-Pop makes it even more disrespectful.

I get that Weverse Magazine is based in Korea but some wider scopes need to be applied to some of these articles so stuff like THIS doesn’t happen. 🙃 https://t.co/SFB5MeIuSU

At this time, despite backlash and criticism, the article is still up and unedited, nor has an apology been issued.

What’s Happening Around The World