EXO’s Sehun Proves To Be The Most Wholesomely Supportive Member To Xiumin On His Solo Debut : Entertainment Daily 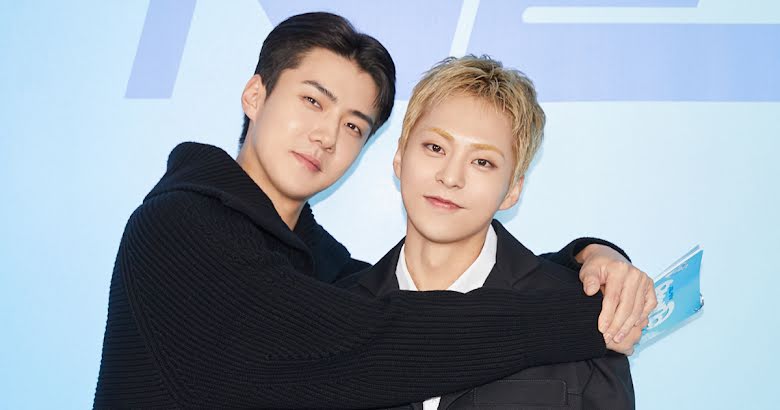 “He said that I look handsome!” — Xiumin

EXO‘s Sehun was the most wholesomely supportive member to Xiumin on his solo debut, once again proving the members are a true family.

Xiumin made his long-awaited solo debut with the album Brand New on September 26.

Fans were naturally excited, but perhaps not as much as Xiumin’s own members. Like he did with Kai‘s comeback Peaches, Sehun acted as host for the Brand New press conference, which EXO-Ls were more than happy to see.

But he didn’t only show support through his presence, which alone already brought Xiumin some comfort.

xiumin: i’m greeting you as solo artist. i’m very nervous but i think that i will be able to gain a lot of strength from maknae sehunnie who helped me out as the mc. please look forward to it.

Sehun was also very vocal about his love for the album. During the press conference, Xiumin said that Sehun had visited him during the filming of his “Brand New” MV and made him feel reassured after saying that it looked great and that Xiumin should go ahead and do what he really wanted to do.

xiumin: i remembered what sehun told me. he visited the set of ‘brand new’ mv, watched the choreo video and said this coolly, “that’s good. you look hip. do you like it, hyung? if that’s what you like, just do it as you want!” and those words have given strength & moved my heart. pic.twitter.com/ekywaGsqWs

Sehun also shared his favorite song on the album, which is “Love Letter.” In fact, he stated he was going to add it to his playlist straight away, which currently happens to be filled with Chen‘s songs (proving Sehun truly is EXO’s biggest fan).

Sehun was impressed by the songs in Xiumin’s album & kept praising them with “It’s great~!”, esp. ‘Love Letter’~

XM: Don’t you like ballads?
SH: I’ll add it to my playlist right away. It’s now filled with Jongdae hyung’s songs. I’ll move his down (the list) now (& add yours in)~

But it wasn’t only during the press conference that Sehun showed his support for Xiumin. EXO-Ls were also amused at how often his name came up during Xiumin’s countdown live stream.

The whole live is about minseok mentioning sehun every 5 minutes

His positive comments came up as Xiumin discussed the MV…

“sehun said the mv turned out great! and he said that i look handsome.”

😂😂 this is probably from the mv reaction video!! i cant wait to watch it pic.twitter.com/AuntwVkMjw

…and then again when he mentioned that Sehun had promised to practice “Love Letter.”

#XIUMIN Sehunnie love this song ‘Love Letter’ by the way, he said he will listen to this song and practice it. 🥹🫶🏻#SEHUN #세훈 pic.twitter.com/BQlKxkbWoM

There is no doubt that no one loves EXO as much as Sehun. After all, despite his busy schedule, Sehun never fails to be the most encouraging member!

xiumin said when he has many worries about (his solo album), sehun told him “i don’t think you have to worry (about it). it was so perfect. i hope you don’t feel pressured and just enjoy. just do well on your performances and have fun with the fans”~

If you haven’t seen it yet, check out Xiumin’s “Brand New” on the link below.