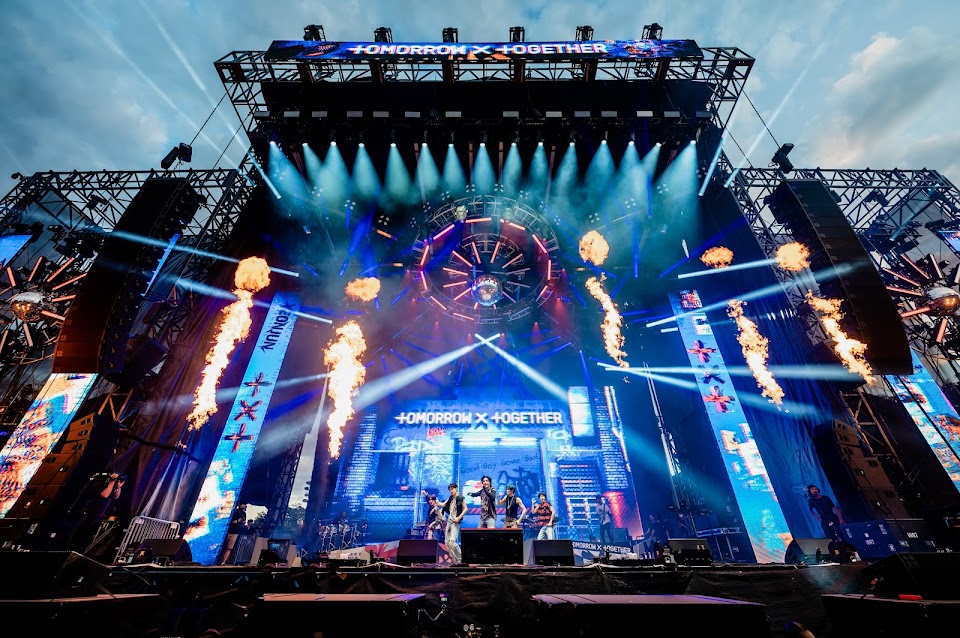 After an incredible eight-song set, TXT officially became the first K-Pop group to perform at Lollapalooza.

TXT performed some of their top hits, including “Good Boy Gone Bad,” “Frost,” “LO$ER=LO♡ER,” and more.

They even performed their newest song with iann dior, “Valley of Lies,” bringing out the American artist as a special guest to perform with them.

TXT amazed the audience with the live vocals and powerful choreography, drawing an impressive crowd after initially expressing fears in a live broadcast that they wouldn’t get a reaction from the audience.

Instead, the crowd was filled with supportive fans, including two famous audience members, TXT’s senior labelmates BTS‘s Jimin and J-Hope.

Jimin with beomgyu, omg two of my favourite together 🥺💜 #TXTPALOOZA#HOBIPALOOZA#Lollapaloozapic.twitter.com/98dq0pDdJ6

While all of the members shined on stage, one member caught the locals’ attention, quickly becoming “the blue hair guy” on social media as people searched to learn more about him.

TXT’s Yeonjun stirred quite a reaction with his charismatic performance, bright blue hair, and toned muscles in a sleeveless shirt.

YEONJUN IS INSANE A MENACE pic.twitter.com/ZWdtbLAIFV

Idk much about txt . BUT my camera roll is currently entirely a pretty guy with blue hair pic.twitter.com/5vHkKzs6iZ

Fans pointed out that Yeonjun has gone viral among K-Pop fans for being “the blue hair guy” before after TXT’s Melon Music Awards performance in 2019. A fan hilariously predicted there would be a round two of “who’s the blue hair guy” when TXT finished their Lollapalooza stage.

are we ready for round 2 of “whos the blue hair guy” after lollapalooza pic.twitter.com/UQzv6QQwtB

The prediction came true as “blue hair” tweets returned and increased further after the American rock band Wallows posted a picture with TXT. Dylan Minnette, a member of Wallows, is also well-known for his leading role in the Netflix show 13 Reasons Why.

TXT’s Yeonjun is currently still trending on Twitter, with over 122,000 tweets discussing the idol and TXT.

For more on TXT’s iconic Lollapalooza performance, check out the article below!