“My Name” Co-Star Addresses Dating Rumor Between Song Kang And Han So Hee After A Photo Surfaces : Entertainment Daily 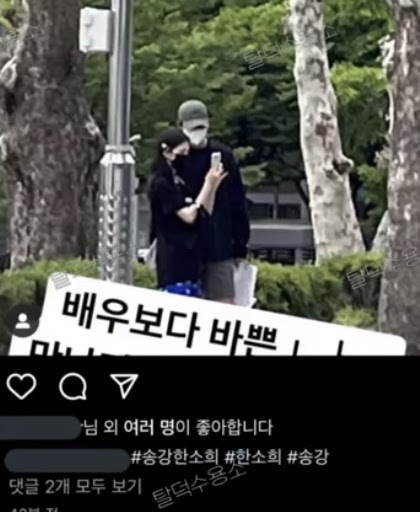 On June 18, 2022 (KST), an alleged photo of actors Song Kang and Han So Hee “on a date” began circulating on social media platforms—as well as on YouTube, in a speculative video uploaded by a gossip channel SOJANG.

Initially, the video reported that the photo—capturing Song Kang and Han So Hee in casual outfits—surfaced on an Instagram feed allegedly belonging to Song Kang’s sasaeng fan. While the two people in the photo are masked and hence nearly impossible to recognize, the said Instagram account shared the photo with hashtags #SongKang and #HanSoHee and re-sparked the dating rumor between these Nevertheless co-stars.

Fueled by the chemistry they had on the set of Nevertheless, Song Kang and Han So Hee have been embroiled in dating rumors since 2021. With the photo surfacing, Koreans began wondering about their relationship; Some Korean media outlets even reported on it—though pointing out that neither party has commented on the rumor.

Later, on June 19 (KST), Han So Hee’s My Name co-star Moon Sang Min addressed the photo being circulated and clarified that the photo is from a “My Name get-together.”

Hinting that he is the person photographed next to Han So Hee, the actor uploaded the original version of the photo on his Instagram story and tagged the actress as well as the person who actually snapped the photo.

Following Moon Sang Min’s post, the Korean media Insight also clarified in a report that “a photographer, who is close to Han So Hee, snapped and shared the photo as an Instagram story at a ‘My Name’ get-together.”

While Koreans have since been commenting on “how easy it is to stir up rumors based on unverified photos,” SOJANG is yet to remove the speculative video from the channel.