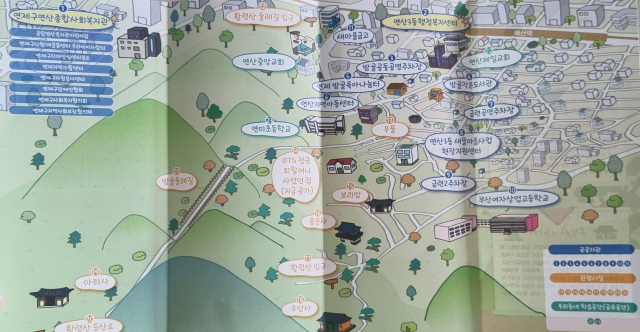 A social welfare center in Busan has some under fire for “invading the privacy” as well as exploiting BTS‘s Jungkook and his family. As many know, Jungkook hails from Busan although he moved up to Seoul later on to pursue his dreams. While it is unknown where his family resides currently, his grandmother used to stay in a village in Yeonje-gu, Busan.

The issue cropped up when a village map was distributed by the Yeonje-gu Yeonsan Combined Social Welfare Center. The map depicted various public facilities and tourist attractions.

A label on the map caught the eye of many as it seemed to be different from the others.

The house that BTS Jungkook’s grandmother lived in. (It is now empty)

Although the house is now empty, it was classified in the map as a tourist attraction and facility. The social welfare center made a statement to the press that the house was currently not lived in but they had not yet received the agreement of the other citizens in the neighborhood. They did not seek permission from Jungkook either.

When we were creating the map, we did not simply seek to make it informative but also to include fun elements in it and hence we ended up including information concerning the singer. We thought that it would enrich the things to see in the village.

Naturally, not only fans are enraged, but also the villagers. An elderly villager had complained that strangers had been coming to ask about the address of the house and that including a famous singer’s family home in the map had created trouble for the villagers.

Netizens criticized the social welfare center for their lack of foresight and consideration.

HYBE has yet to speak on the issue. No news about the withdrawal or change of the maps have been reported either. Stay tuned for updates on the matter.