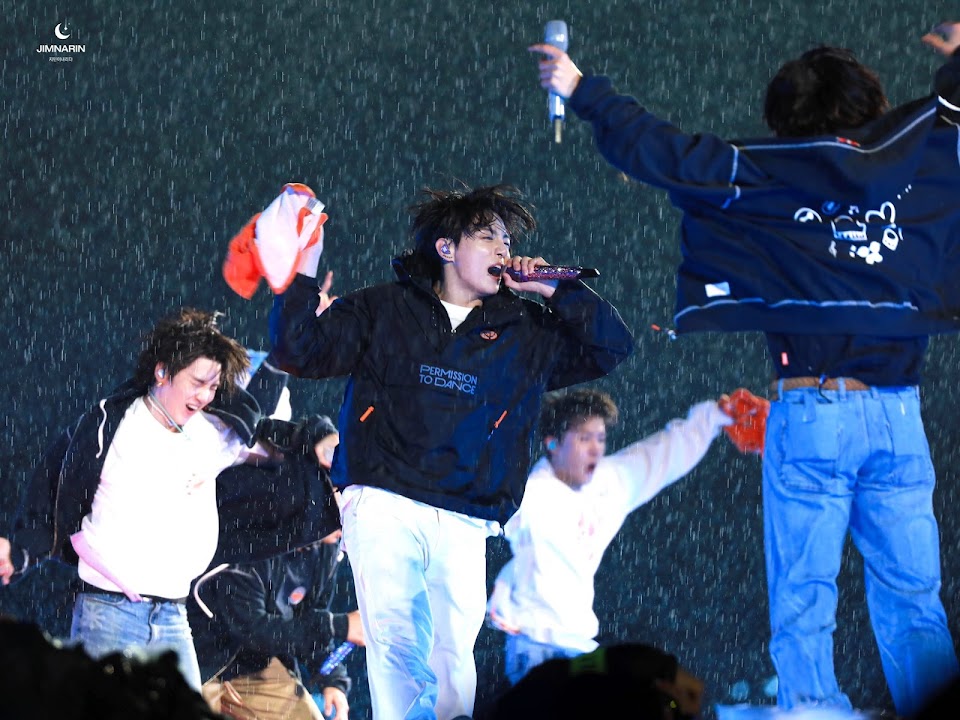 RM‘s song, “Forever Rain,” decided to make a cameo at PERMISSION TO DANCE ON STAGE – SEOUL!

On Day 2 of BTS’s concert, it didn’t just rain. It poured! BTS performed in a torrential downpour, the most intense they have ever faced on stage. Even their legendary 2019 concert in Chicago couldn’t compare.

By the end of the show, the members–and everyone in attendance–were soaked to the skin.

In a recent live broadcast, Surprise! BTS!!, RM, J-Hope, Suga, V, Jungkook, and Jimin talked about their rainest concert yet. Despite the weather, BTS were still able to dance on the slippery stage, with a few minor changes.

Dance leader J-Hope suggested changing the last part of “Permission to Dance.” This adjustment might have prevented injuries.

Unfortunately, some members still wiped out at the show. Suga landed flat on his back during “Telepathy.” It was painful, but he’s happy to joke about it now.

You may not know the story of me falling down at the stage, but there are sheets on the floor of the stage. There are these marks in ‘Permission to Dance.’ If you step on these, you must fall down.

J-Hope, who witnessed the moment live, said he’d laughed so much he couldn’t sing!

Suga felt embarrassed at the time, but he wasn’t the only member who got up close and personal with the stage. Jimin also fell at a Seoul concert, during “Black Swan.”

According to Jimin, he lost his balance while trying to look “cool.”

Jimin: And I fell down during ‘Black Swan.’ I fell down while I was pretending to look cool. I was doing like this [rolling his head], and then fell down.

J-Hope: I saw the video of it. You looked so natural in the video.

Thankfully, no one was seriously hurt! Read more from BTS’s broadcast here: