5 Times The Revenge Gets Going In Episodes 5-6 Of “Military Prosecutor Doberman” : Entertainment Daily

“Military Prosecutor Doberman” returns with a tense couplet as alliances get underway and former ties shatter. Do Bae Man’s (Ahn Bo Hyun) realization of the truth behind his parents’ death sends him through all five stages of grief as he tries to figure out whether he should let the past be the past or dive into a suddenly uncertain future. But he may not have as much of a choice as he thinks. As Cha Woo In (Jo Bo Ah) indicates, an unresolved past will always bleed into the present.

Warning: spoilers for episodes 5-6 below.

Bae Man takes a bit of time to ease into the prospect of revenge. He flat-out rejects Woo In even after remembering what Noh Hwa Young (Oh Yeon Soo) did to his parents, but his old life follows him everywhere into his new job as an equity partner at a law firm. Tasked with ensuring that rich people walk away scot-free from their crimes, Bae Man is tormented by the knowledge that his parents died while fighting for what was right.

Woo In watches and waits, knowing he’ll have no choice but to come to her. And she’s right. He eventually caves, resigning from his fancy job and returning dramatically to the military base.

At first it seemed as though Bae Man would declare outright war, what with him storming into the courtroom and making quite the scene. However, as he silently sits through Noh Tae Nam’s (Kim Woo Seok) trial and even humbles himself before his nemesis Yong Moon Goo (Kim Young Min), it’s clear that Bae Man has a grander scheme at play. Woo In is furious as Bae Man lets the trial play out to its biased conclusion, but he vows that he’ll be her hunting dog and that his revenge will be ice cold.

Bae Man may have been hotheaded in the past but he currently works with his head, capable of putting aside his emotions, even his dignity, if it means achieving his goals. Woo In, on the other hand, despite being manipulative in her own way, is hot-tempered when it comes down to getting the job done. She still believes in ideals like truth and justice, whereas those are just tools to Bae Man. It’s more obvious than ever as to why Woo In was so determined to have Bae Man on her side. Why compromise her own ideals when she has someone so familiar with doing so and who’s more than happy to do it? There’s a grudging respect (and a hefty dose of chemistry) between the two, both of which they’re going to need for what’s coming, because the bad guys are in chaos, and that’s always dangerous.

There’s no one who better embodies the saying “you’ve made your bed, now lie in it” than Noh Tae Nam. Dragged kicking and screaming to the military, he makes it evident that he considers everyone and everything beneath him. The team captain, under strict orders from Hwa Young not to give Tae Nam any preferential treatment, proceeds to give him hell. Whenever Tae Nam acts out, his team members are punished (which is common in the military). This has the effect of everyone in the team despising Tae Nam, and he knows it too. 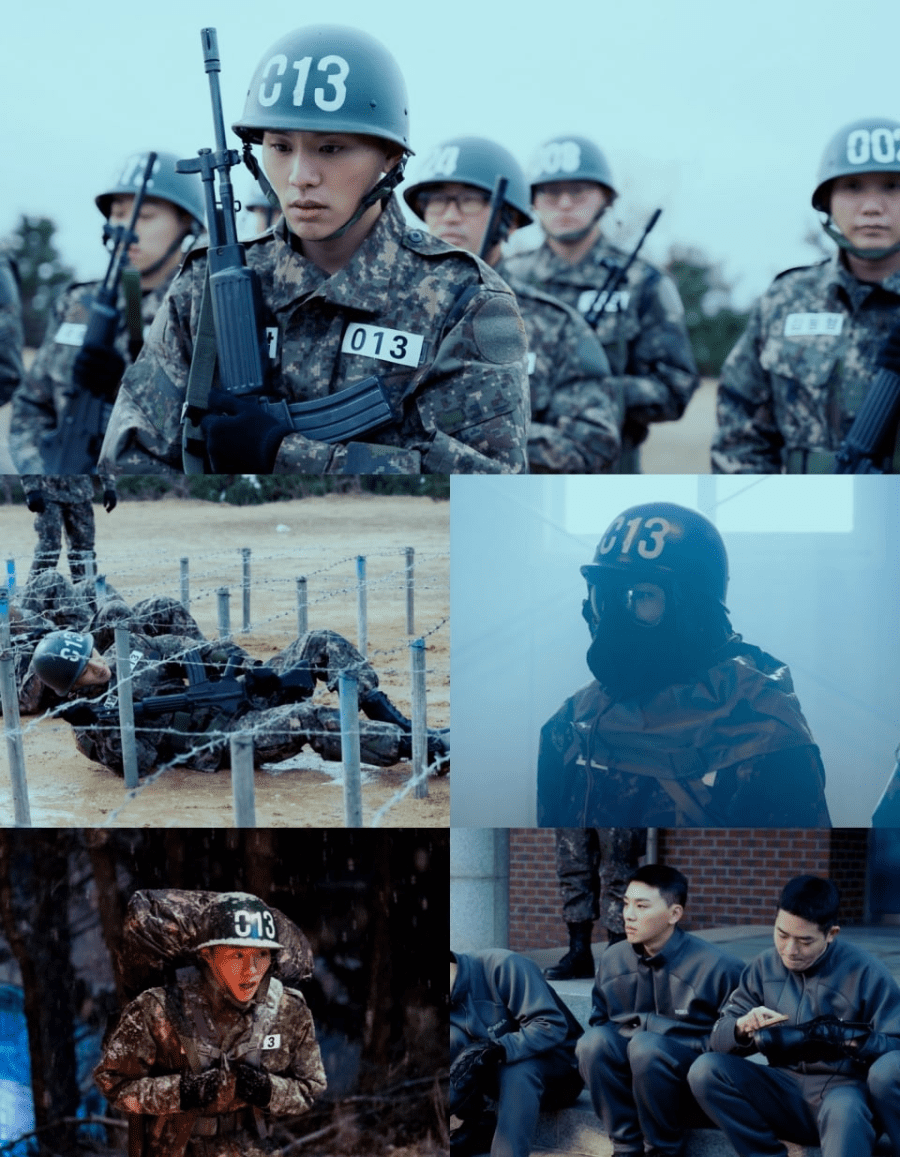 So when they all show up to witness his trial, it is a delight for them as Yong Moon Goo unveils his final get-Tae-Nam-declared-innocent trump card: Tae Nam has erectile dysfunction. This show has really hit it out of the park with their punishments (from the grenade holding to Woo In’s kidnapping) and this is pure genius. To be humiliated in front of a room full of military men who already hate his guts is a breaking point for Tae Nam as the other soldiers gleefully seize upon Tae Nam’s sore spot as proof that he’s less than a man. It’s a weaponization of toxic masculinity, and another example of this show delivering some fantastic dissonance, because it’s actually awful to mock a man for having this medical condition. But since the person being mocked is Tae Nam, it’s easier to laugh along because he’s so easy to hate.

After Tae Nam’s outburst in the courtroom, Woo In wonders if the humiliation might be too much for him. Yong Moon Goo laughs off the implication that Tae Nam could desert, only to panic that night when Tae Nam does just that. It’s quite telling that Tae Nam leaves a long letter to his mother castigating the military for being hell on earth. Some of the complains are utterly invalid but there are a few lines that ring true, and accurately break down the rigidity and hypermasculinity of military culture. Hwa Young immediately demands that Tae Nam’s desertion be kept on the low down until the new Minister of Justice’s appointment ceremony is complete, but she asks that Tae Nam be treated like any other deserter and punished when found (wow, she’s cold). Still, whispers leak around the base, and Woo In’s delighted by this turn of events. But she’s even more surprised to find that Bae Man actually engineered the escape.

Ever since Bae Man discovered that Yong Moon Goo was going to use erectile dysfunction as his final card, he knew the opportunity was ripe to get rid of his enemy’s scion. Convincing Tae Nam’s team captain to lock the soldier in a food truck exiting the barracks “as a joke” wasn’t difficult and Tae Nam did the rest on his own. Deserting is a huge no-no in the military, and for the son of the newly appointed commander to escape on her turf, it looks even worse. Moon Goo has no choice but to plead with Bae Man (who’s still playing double agent) to find Tae Nam before it’s too late. And this is exactly what Bae Man was waiting for.

4. The reveal of the “Patriotic Society” 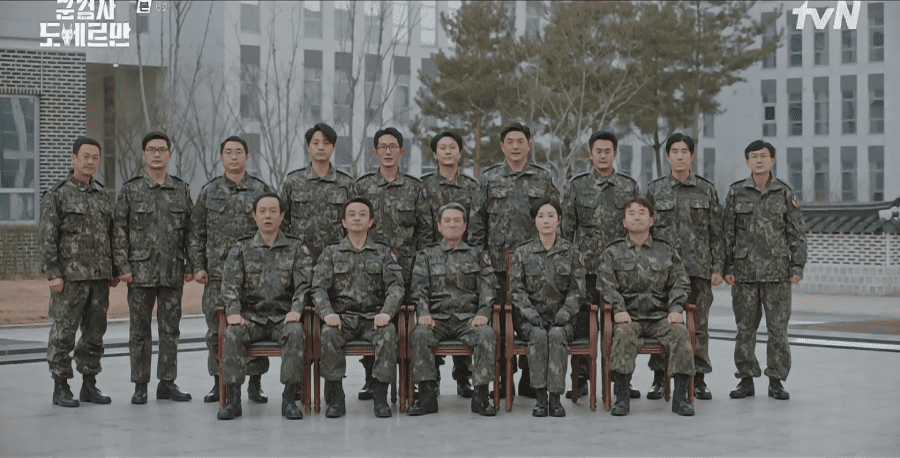 Thus far, we only saw Hwa Young, Moon Goo, and Tae Nam as the big bads. However, evil doesn’t exist in isolation. Hwa Young is a major cog in a larger organization known as the Patriotic Society. Their goals are vague as of yet, but seem to be predicated on the military having much more power in the country, including over civilian affairs. The head of the society is Lee Jae Sik (Nam Kyung Eup) whose appointment as Minister of Justice is a huge win for the Society and for Hwa Young, as she directly serves under him. Going from Lee Jae Shik’s secretary to only two levels below him is a testament to her willpower in a male-dominated workplace like the military. But she’s also aware that she’s walking a tightrope. Lee Jae Shik is just easing into his new role, ready to rally the might of the Patriotic Society as he enters a new stage in his career. He can’t afford for any mishaps to cast a shadow over his tenure as Minister of Justice, least of all Hwa Young’s idiot son. That’s why Hwa Young even had Tae Nam forced into the military, so she could keep an eye on him. So much for that. 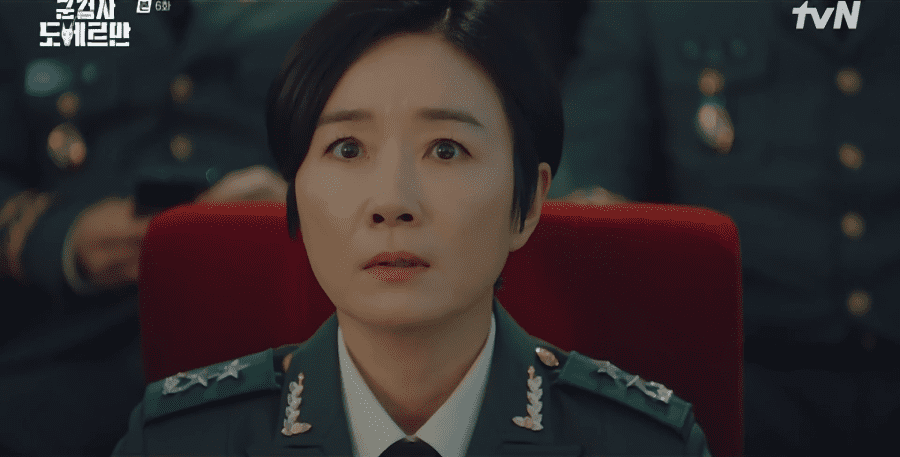 The person who’ll probably be happiest about Tae Nam’s desertion is the Society’s Number Two: Hong Moo Seob (Lee Jung Yeol). He’s been on a tightrope himself, wondering when his position will swap with Hwa Young, who is Number Three. Numbers Four and Five are respectively Heo Kang In (Jung In Ki), a misogynistic soldier who thinks women don’t belong in the military and Hwa Young’s direct rival, and Won Ki Choon (Im Chul Hyung), a military captain known as the “Mine Hero.” There’s something exciting about a secret society with numbered ranks that brings to mind the villain societies in mangas like “Bleach” and “Naruto.” It’s going to be so satisfying to see each of them get taken down with a punishment tailor-made for them.

5. Tae Nam’s capture by Woo In (and that finger)

Speaking of punishment, Tae Nam sure gets his. Upon escaping, he makes use of a friend (and a factory worker’s phone) to return himself to his former brand-name-wearing glory. It’s oddly sweet that he actually pays the foreign factory worker for his phone instead of cheating the guy the way a classic bad guy might. Would Tae Nam have been a decent person if it weren’t for his mother? It’s hard to say. 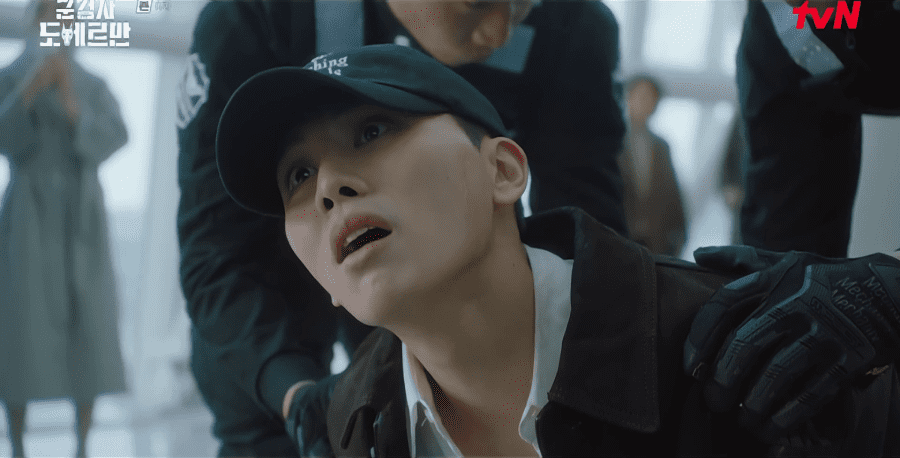 But to his friend who is immediately kidnapped by Woo In, Tae Nam’s not worth fighting for. During interrogation, Bae Man squirms as Woo In brings out a sharp pair of bolt cutters. She tells Tae Nam’s friend that he has 10 chances for each of his 10 fingers to tell them where Tae Nam is. However, the idiot friend starts blabbing about how sharing illegal rape videos is just a bit of guy stuff, and Woo In loses it. And the friend loses a finger. Bae Man is torn between shock, fear, and awe as Woo In shrugs off the mutilation as the other guy’s fault and tells him to spill it before it’s too late for the hospital to reattach the finger.

To his credit, Tae Nam isn’t a complete idiot and attempts to foil Bae Man and Woo In’s plans to catch him before he leaves the country. Alas, Bolt is his undoing. Woo In knows well that Tae Nam would never go anywhere without his faithful companion, and a track and petting the dog is all she needs to catch Tae Nam at the airport, where he proceeds to make a spectacular public mess of his reputation. Tae Nam, who jumped ship into the military to avoid prison, is now stuck in military prison. Poetic justice is served and the show promises to keep it coming. I, for one, can’t wait!