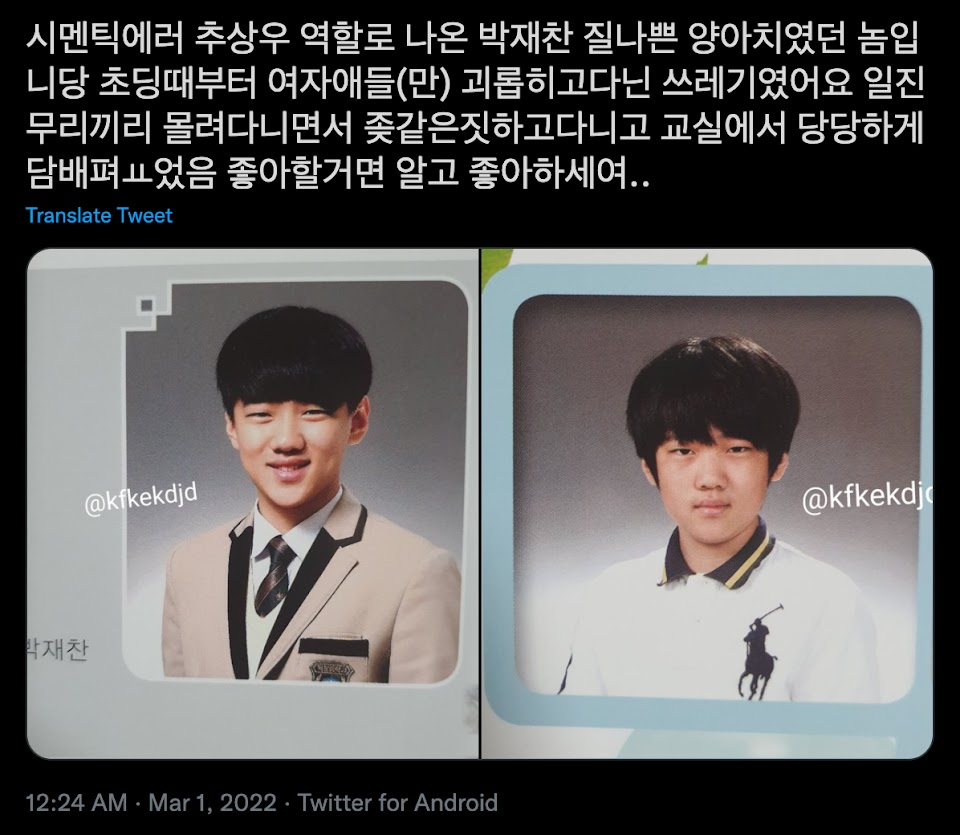 DONGKIZ’s Jaechan, who is receiving attention through the BL-based drama series, Semantic Error, has been swept up in school bullying accusations. Recently, Netizen A claimed that Jaechan was a bully through a post on Twitter.

Park Jae Chan, who plays Choo Sang Woo in ‘Semantic Error’, was a school bully. He bullied only female classmates since elementary school. He went around bothering people and doing stupid things with his group of bullies and even smoked in the classroom. Know the truth before you like him.

He used to think idol fans are pathetic and would bad mouth male idols until he became a Big Hit trainee in ninth grade. I remember people saying ‘Does Big Hit not look at trainees’ past before recruiting them?’. After that, I lived without knowing if he debuted or what but I’m posting this because it’s funny that people like him.

He also posted a picture on his Kakao Story of him smoking and acting cool so if there’s any Mokun Elementary or Middle school who has this picture, please share.

Netizen B, who is one year younger than Park, stated “He was the most famous out of the bully group and smoking was a given. If you asked the middle school graduates of that time, they’ll know what I’m talking about” They continued, “He would rate girls faces and bodies…there are so many stories about his wrongdoings. His hobby was to bully his juniors one by one”.

This is not the first time Park Jaechan has been accused of school bullying. One netizen released a graduation photo of Park the year of his debut (2019).

He had a trash personality who drank and smoked.  He was kicked out of Big Hit because he didn’t stop updating his social media with photos of him meeting different girls even after becoming a trainee. He also dropped out of high school and totally changed his appearance.

Another netizen, who claimed to be his classmate, revealed he bullied them about their weight.

I was a classmate of Park Jaechan and I have something to report. He told me that guys would like me if I lost weight. Afterwards, he joined a group my friend was in and would ask where I was all the time and continued to intimidate me.

On the other hand, Park Jaechan made his debut through DONGKIZ in 2019 and recently gained popularity through his role in the Watcha drama series, Semantic Error. No statement has been released regarding this issue.