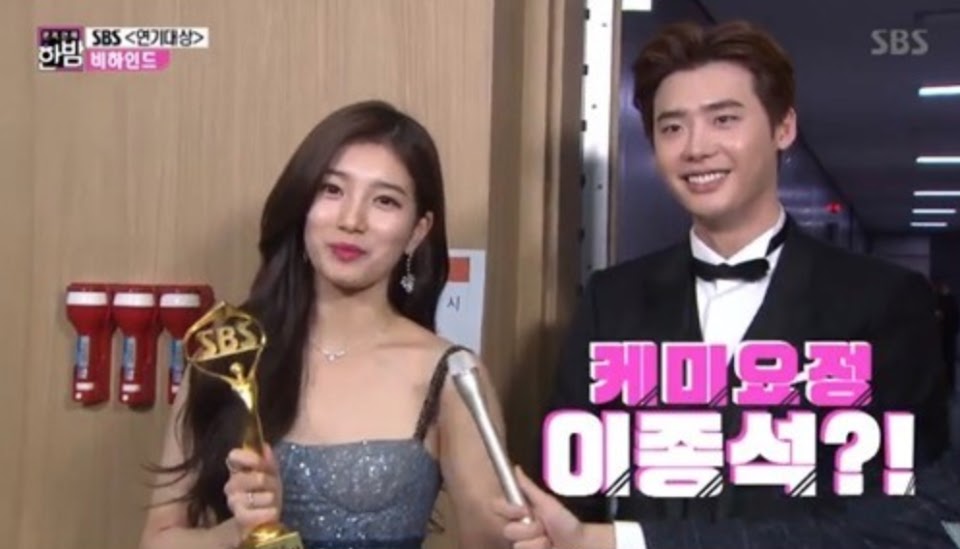 Suzy and Lee Jong Suk‘s amazing chemistry shined in the real world as much as it did in While You Were Sleeping. Even though the series ended, they just might make everyone seriously jealous.

They gave a lovely acceptance speech, thanking each other for their great performances, even joking with MC Shin Dong Yup about how they developed feelings for them from time to time for the drama.

Shin Dong Yup: While being immersed in your roles, did you actually fall in love a little?

Lee Jong Suk: Suzy is the most beautiful woman in Korea. I fell in love from time to time.

Suzy: Because Jong Suk oppa is so good looking, I could really immerse myself in the role.

Their chemistry continued to the backstage as revealed by SBS’s Entertainment News Hanbam. Asked about their win, the two joked with each other as though they were a real couple.

Suzy: Jong Suk oppa might just be a chemistry fairy.

Lee Jong Suk: Did you have some drinks?

Seeing as how easygoing they are with each other, it’s really no wonder that the two won the Best Couple prize for 2017!