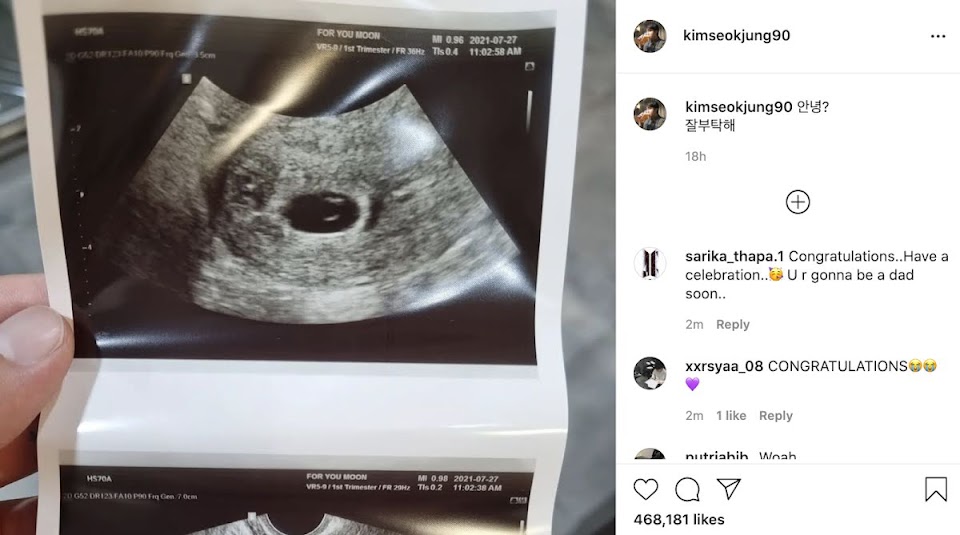 Back in July 2021, netizens couldn’t contain their excitement when it was revealed that BTS’s Jin was going to be an uncle. His older brother, Kim Seok Jung, had previously married his wife, Kim Ah Reum, and they announced the amazing news that Ah Reum was pregnant!

Along with the caption, “Hello? We’re looking forward to being with you,” the couple made it public that they were expecting.

In particular, Kim Ah Reum posted a comment of a buttered pancake emoji as well as “Butter-yah, please grow up healthily,” leading fans to wonder if that was what they had decided to name the baby.

In the comments, Seok Jung confirmed the naming and even joked that it was all done with the help of Jin himself.

Seok Jung: “I asked my brother to name it.”

At the time, he even changed his Instagram profile to reflect the addition to his family in his profile as it read, “Kim Seok Jung and Kim Ah Reum, and Kim Butter.”

On March 14, ARMYs noticed an update on Seok Jung’s public Instagram account and couldn’t hide their excitement. According to the post, it seems like Jin has finally become an uncle after the birthday of “Baby Butter.”

In the image, Seok Jung shared the name of the baby, which is “Kim Sun,” and the words on the picture shared details of the newest addition to the family, “Boy. 0 months. 0 days. 1 years old. (0 years old international age) monthly log.”

If that wasn’t enough, Seok Jung changed his Instagram username to “Sun_dad90” and the description reads, “Kim Seok Jung and Kim Ah Reum, and Kim Seon.”

When the post was shared, fans in the comments offered their congratulations. On Twitter, they shared their love for the couple and their newest arrival and shared how excited they are to see “Uncle Jin” interact with his nephew.

JIN HAS FINALLY BECAME AN UNCLE. 👶

Baby butter’s name is “Kim Sun” 🥺 We would love to see a photo of the moon and sun together! Congratulations to your sister-in-law, your brother and you, jin, you will be an excellent uncle.

In particular, one ARMY shared how although the name shared was Kim Sun, it might be “Kim Seon” as in an interview from their early days as a group, Jin explained that, for the next generation in their family, they have to use “Seon.”

Looks like Baby Butter’s name is actually “Kim Seon” but on Seokjung’s Ig name, he made it “Sun”.

Seokjin said before on an interview from their debut days that for the next generation in their family, they have to use “Seon”. pic.twitter.com/iHIPBOaaqG

Throughout the time Jin’s sister-in-law was pregnant, he proved to be the perfect person. Aside from helping to choose the baby’s nickname, Jin made sure to deliver her some of the famous “Jin” strawberries.

In a post, Jin’s brother revealed that his wife was craving strawberries. So, being a thoughtful brother-in-law, Jin delivered them himself, thus curing his sister-in-law’s craving.

Because the pregnant woman wanted to eat these, a very precious person personally delivered the strawberries themselves. So freaking delicious!!

Hopefully, it won’t be long until ARMYs are treated to some interactions between Uncle Jin and baby Sun. He will undoubtedly be an amazing uncle and take care of his nephew if his brother or sister-in-law ever needs a break with his playful and caring personality.

You can read more about the announcement below.