Song Kang And Yoon Bak Get Into A Vicious Argument On “Forecasting Love And Weather” : Entertainment Daily

Get ready for more sparks to fly between Song Kang and Yoon Bak on “Forecasting Love and Weather”!

Previously on “Forecasting Love and Weather,” the growing tension between Lee Si Woo and Han Ki Joon (played by Yoon Bak) finally reached its boiling point. Han Ki Joon upset Lee Si Woo by showing up at Jin Ha Kyung’s house drunk, while Han Ki Joon didn’t react well to finding out that his wife Chae Yoo Jin (Girl’s Day’s Yura) had lived together with Lee Si Woo before their marriage. In the end, all that tension exploded into a physical fight at the worst possible moment, with Han Ki Joon unable to stop himself from throwing a punch at Lee Si Woo in front of the press.

Later on, Han Ki Joon tailed Lee Si Woo and Jin Ha Kyung after work on a hunch, leading him to find out that the two co-workers were romantically involved.

In newly released stills from the drama’s next episode, Lee Si Woo and Han Ki Joon will get into another fight at work—but this time of a very different kind. Instead of the messy brawl that landed them both in trouble last week, the two men will duke it out in a fierce 100-minute debate, using words and factual evidence to make their points. 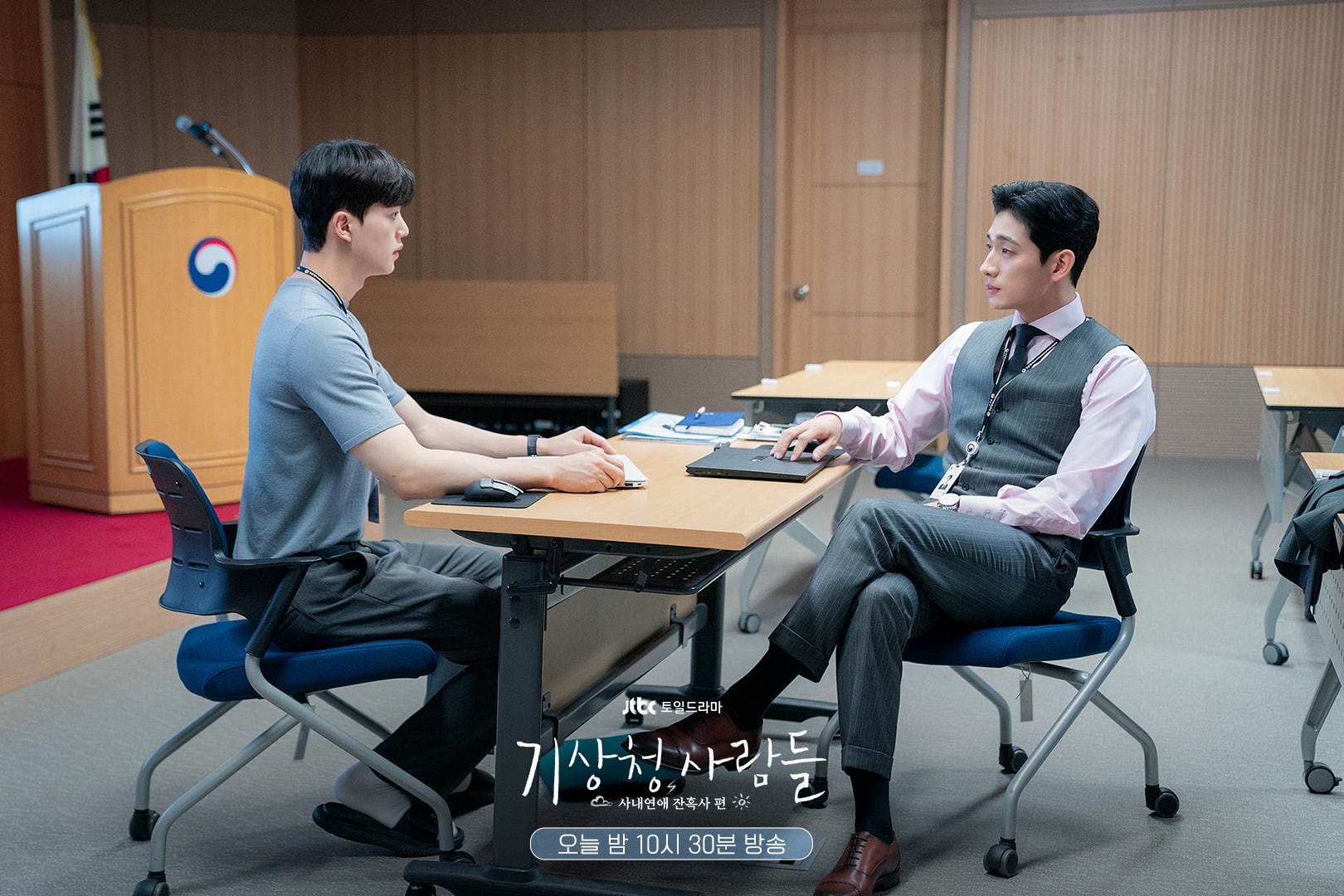 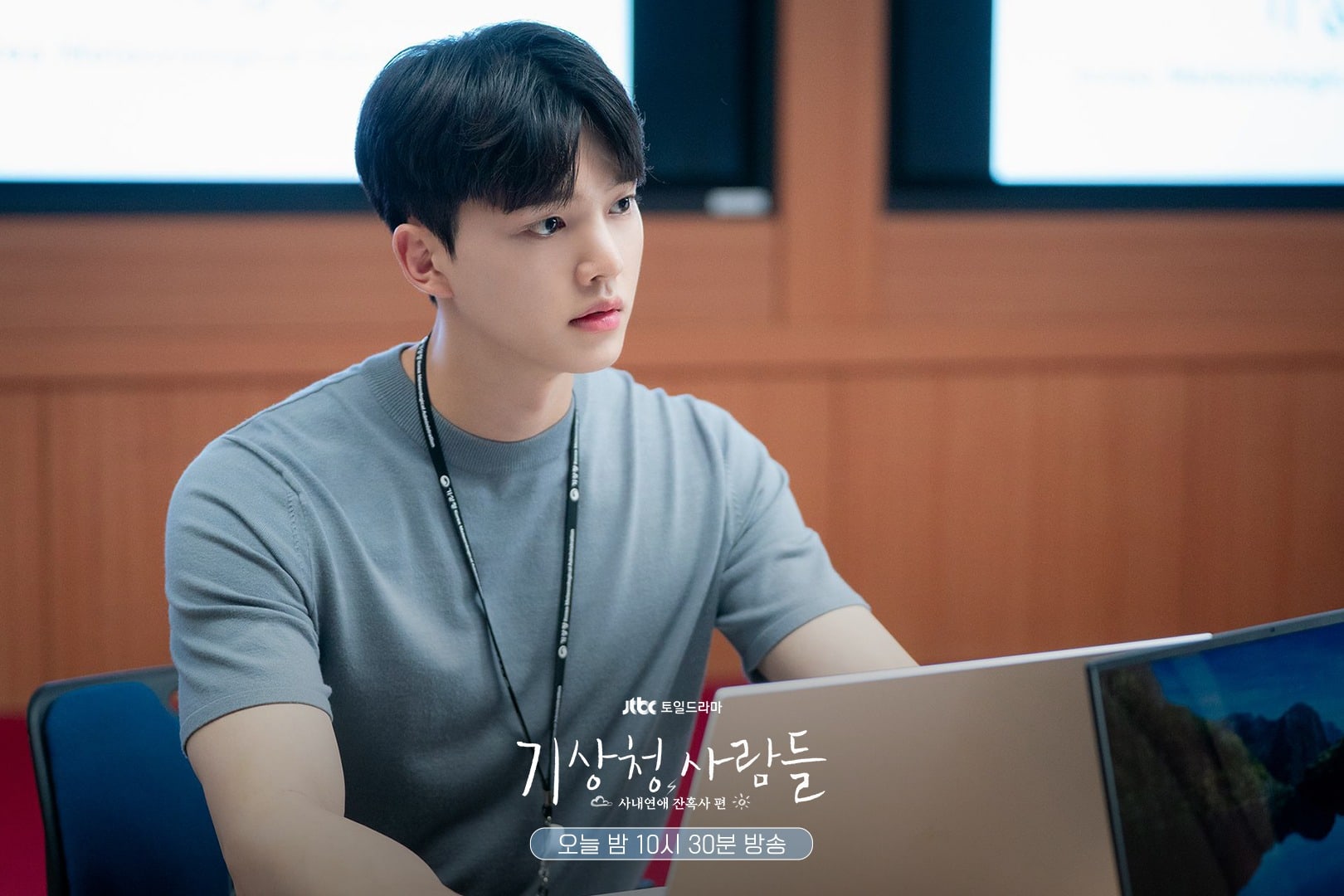 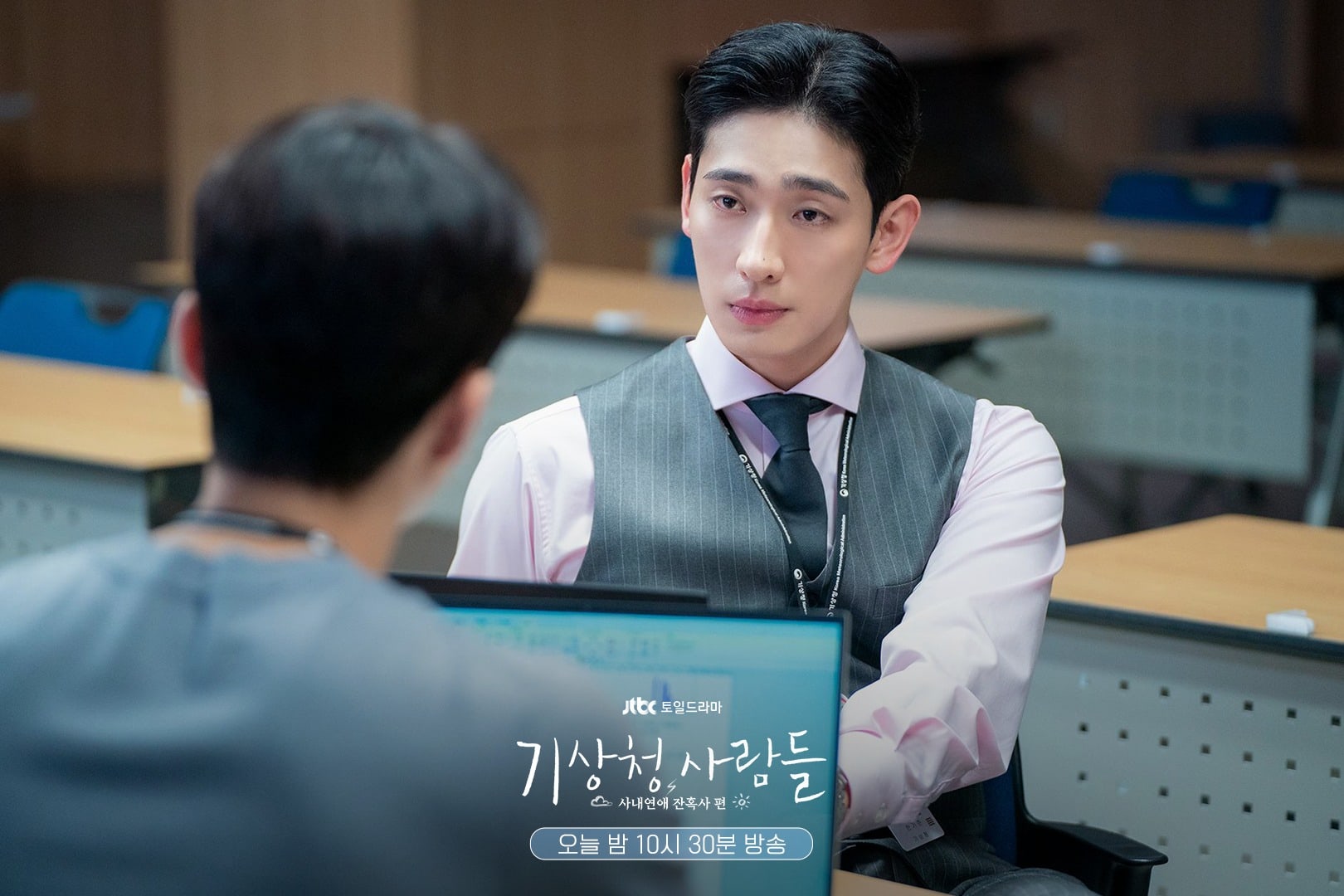 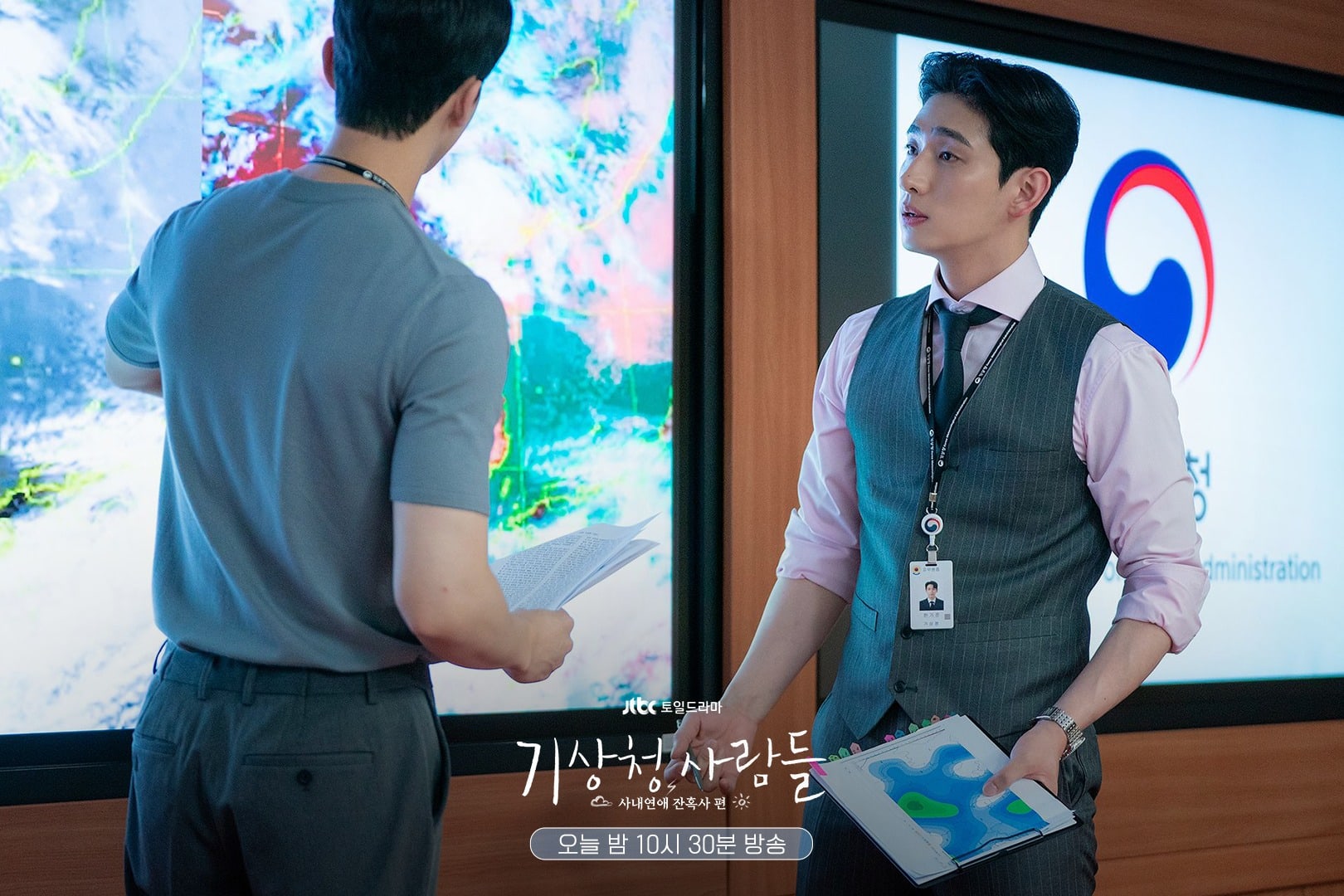 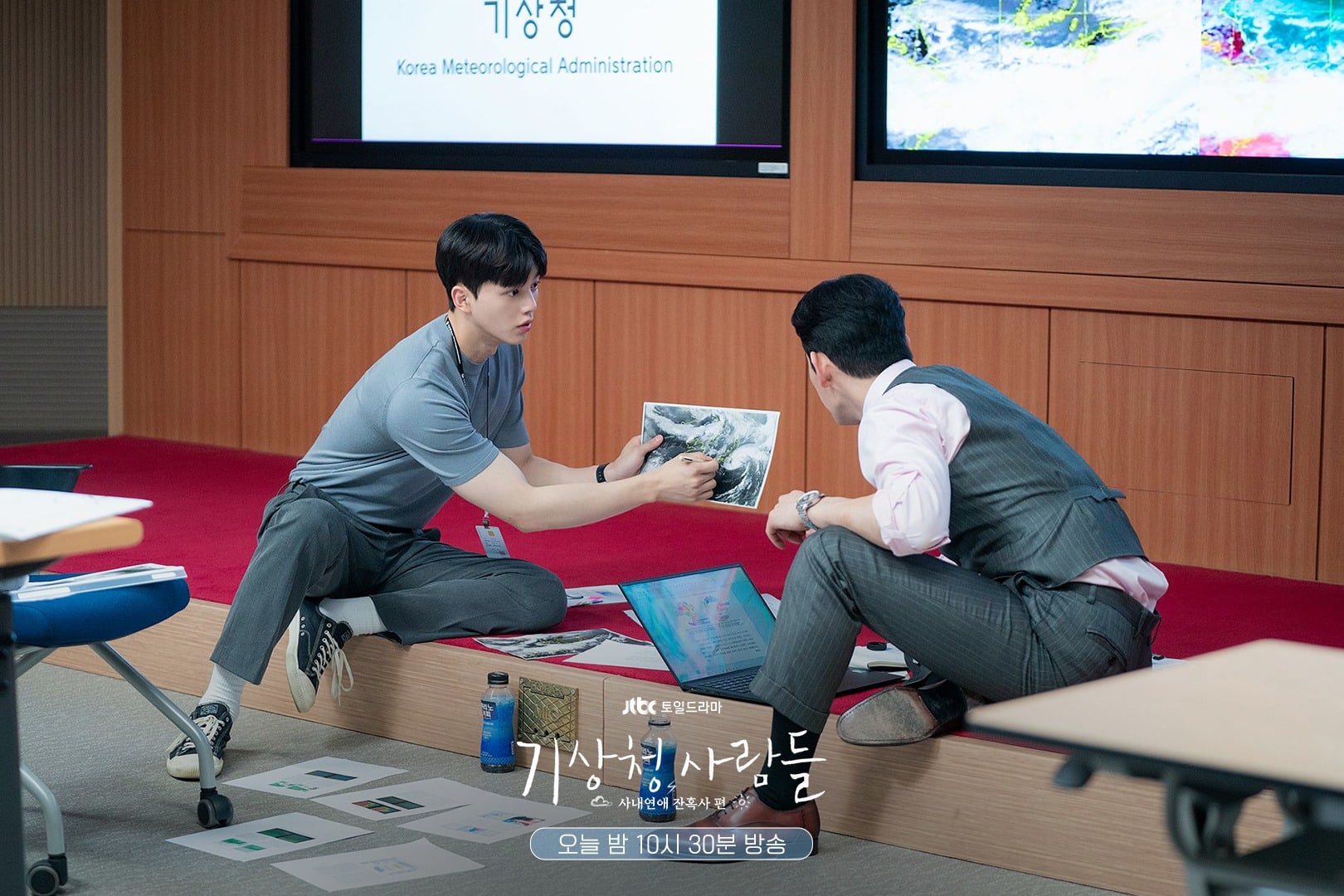 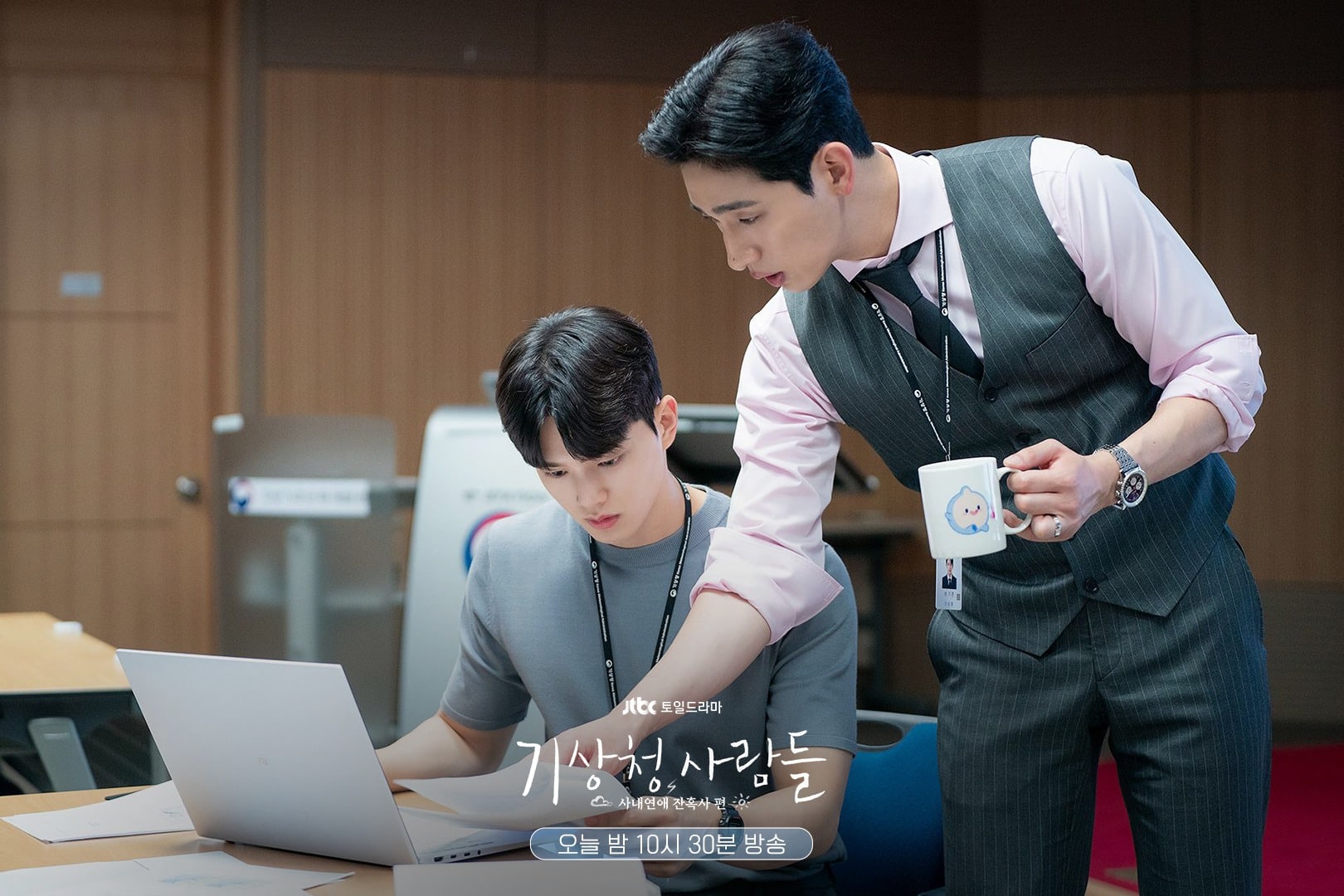 The producers of “Forecasting Love and Weather” commented, “Si Woo and Ki Joon, who displayed the peak of the cruelty of office romance through their fierce and bloody fight, will be engaging in a fierce and bloody war of words this time around.”

They went on to tease, “There will also be a gradual change in the relationship between the two men, who are entangled by their office romances. Please keep an eye on the stories of Si Woo and Ki Joon, who are currently standing at that turning point.”

In the meantime, watch Yoon Bak in “Birthcare Center” with subtitles below!