GOT7’s Jay B Had No Idea Mark Tuan Had Returned To Korea Until He Found Out Via Social Media Like The Rest Of Us : Entertainment Daily 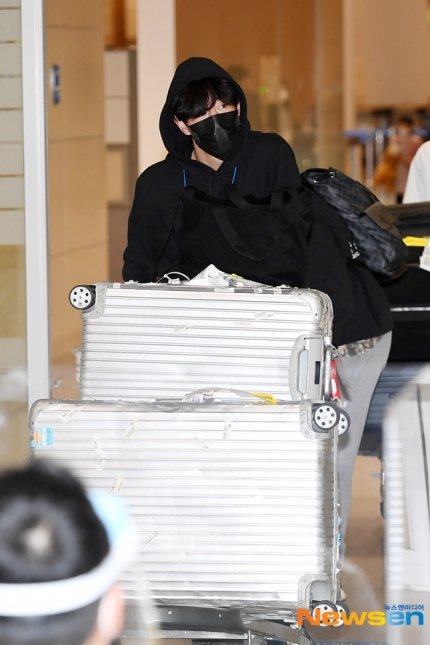 Since the group’s members departed from JYP Entertainment last year, Mark had moved back home to California and signed with Creative Artists Agency LLC. Since then, he has released singles such as “My Life” and “Last Breath.”

Of course, Mark hasn’t just been stuck in one place this entire time. He has attended many events internationally, such as the recent Yves Saint Laurent’s show for Paris Fashion Week.

Now, Mark has returned to South Korea, causing Ahgases to suspect that the GOT7 comeback is truly happening, just as BamBam had teased.

“About got7 comeback spoiler? Well, if Mark and Jackson will arrive in Korea, that already a big spoiler” – Bambam

Then here’s Mark Tuan in Incheon airport representing 1 out of our 2 spoiler: pic.twitter.com/b9uISP2x3Q

24 Oras, one of the biggest news broadcasting shows in the Philippines, reporting about Mark returning to Korea from Paris Fashion Week and the fans expecting the possibility of a GOT7 comeback.#GOT7 #갓세븐 @GOT7Official pic.twitter.com/g1oDWAXRdC

OMG MARK TUAN IS BACK IN KOREA 😭😭 JACKSON WANG WHERE ARE U OMG GOT7 COMEBACK SOON SKSKSKKS pic.twitter.com/s0mg5iAJho

Jackson’s Instagram said “korea” now mark in korea, bambam said “when you see the members at the airport you know the got7 comeback is happening”

Yet, to our surprise, leader Jay B revealed that he had not been informed of Mark’s return until just now.

On Wednesday, Jay B hosted KBS Cool FM‘s STATION Z JAY B’s R&B as usual when a listener commented, requesting he “leave a message for Mark as he is in Korea.” He complied but shared that he only recently discovered that Mark was in Korea, but the source was not from Mark himself.

Ha… Mark-ya. How long has it been? You’re here in Korea, but you didn’t even tell me you were coming to Korea. I found out that you were in Korea through social media.

Jay B was clearly hurt that he found out from others rather than his own member. Like most Ahgases, he heard the news through social media.

He promised he wouldn’t hold a grudge for long. Time heals all wounds, after all.

Well, I’ll feel better once time has passed. Right? Nah, nah, nah, I’m not a petty person like that. Well, I do hold grudges a little, but I’m not exactly that type of person.

Jay B remembered that Mark always talks of eating kimchi jjigae (stew). So, he hopes that he will be able to enjoy some now.

Ha, Mark-ya. Now that you’re in Korea, I hope that you eat the kimchi jjigae that you’re always talking about.

Nevertheless, Jay B felt bad thinking how much better it would be to eat kimchi jjigae together. However, since Mark had not told him of his travels in advance, he wonders if the fellow GOT7 member didn’t want to meet up during his stay.

In any case, you’re not gonna meet me. Right? Looking at how you didn’t tell me… Seems like you have no intention of meeting me.

The leader teased Mark about the lack of communication and advised him to do better. Additionally, he joked that their friendship had come to an end as a result.

If you were gonna get caught via social media in any case, I don’t know why you wouldn’t tell me in advance, it’s upsetting. Mark… It was good. All the memories I had with you were good. Be well.

Still, Jay B, being the generous man he is, gave Mark one last chance…

Well, if you want to meet me, let’s meet once. But I don’t if I’ll see you, I could be busy. Fighting.

The GOT7 members always have jokes and are so good-natured. Jay B is the same man who interviewed himself, after all. So what else can we expect?

Now, Mark, you better reach out to Jay B!

Watch the clip below:

🌴 Ha… Mark-ya. How long has it been? You’re here in Korea, but you didn’t even tell me you were coming to Korea.