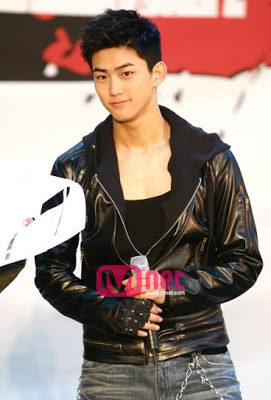 2PM‘s Taecyeon had quite an interesting journey on getting accepted into JYP Entertainment and debuting.

JYP Entertainment hosted a reality survival show to find the next Rain.

Taecyeon managed to get into the top 12 of the show, but his journey there was unique.

Taecyeon originally auditioned for JYP Entertainment while he was living in the U.S. He auditioned with some of his family members, but didn’t think he’d pass.

Taecyeon had no prior experience in regards to singing or dancing, so he decided to audition for modeling.

Taecyeon didn’t have much experience in modeling either, so he looked awkward when he attempted the T-walk.

While Taecyeon might have looked a little awkward during his audition, the people of JYP Entertainment were intrigued and wanted to keep a close eye on him.

Unfortunately, the staff made some mistakes and Taecyeon didn’t recieve this message. He went back to the U.S., thinking he had been eliminated.

That didn’t stop JYP Entertainment, and they contacted Taecyeon to come back for another audition.

Taecyeon originally thought he did horribly during his audition but ended up getting in.

After passing his audition, he participated in the survival show created by JYP Entertainment. He ended up being the first person eliminated from the 12 finalists.

Taecyeon got another chance to prove himself in a consolation match but ended up getting eliminated again.

This didn’t stop Taecyeon, as he constantly practiced his singing and dancing to get another chance. Park Jin Young eventually saw this from Taecyeon, and he accepted Taecyeon as a trainee.

Here is the full video below!