Watch: Jeon Mi Do And Lee Moo Saeng Experience A Flurry Of Emotions Behind The Scenes Of “Thirty-Nine” : Entertainment Daily

JTBC’s “Thirty-Nine” has given viewers another look behind the scenes!

The behind-the-scenes video takes viewers to the house of Jung Chan Young. Lee Moo Saeng, who plays Kim Jin Seok, and Jeon Mi Do go back and forth about the details of their scene to make sure they perfectly convey the necessary emotions. After an emotional take, both actors check on each other, and Jeon Mi Do asks, “Did you cry?” when she notices Lee Moo Saeng wiping away tears. She comments, “I think we cry every time we meet.”

Lee Ji Hyun, who play’s Jung Chan Young’s mother, then arrives on set and exchanges pleasantries with Lee Moo Saeng as they are meeting for the first time. Intentional awkwardness then ensues as the pair play their respective roles, which makes Jeon Mi Do laugh as she observes their flustered dynamic.

The situation grows even more awkward once Son Ye Jin and Kim Ji Hyun arrive. The director decides to put Lee Moo Saeng in the most prominent spot in the room, which leaves the actor in shock at his seat in the spotlight. He plays along well and works on making his character even more flustered through his responses, such as when Kim Ji Hyun asks him what he likes and he responds, “Me? I like Chan Young, of course.” 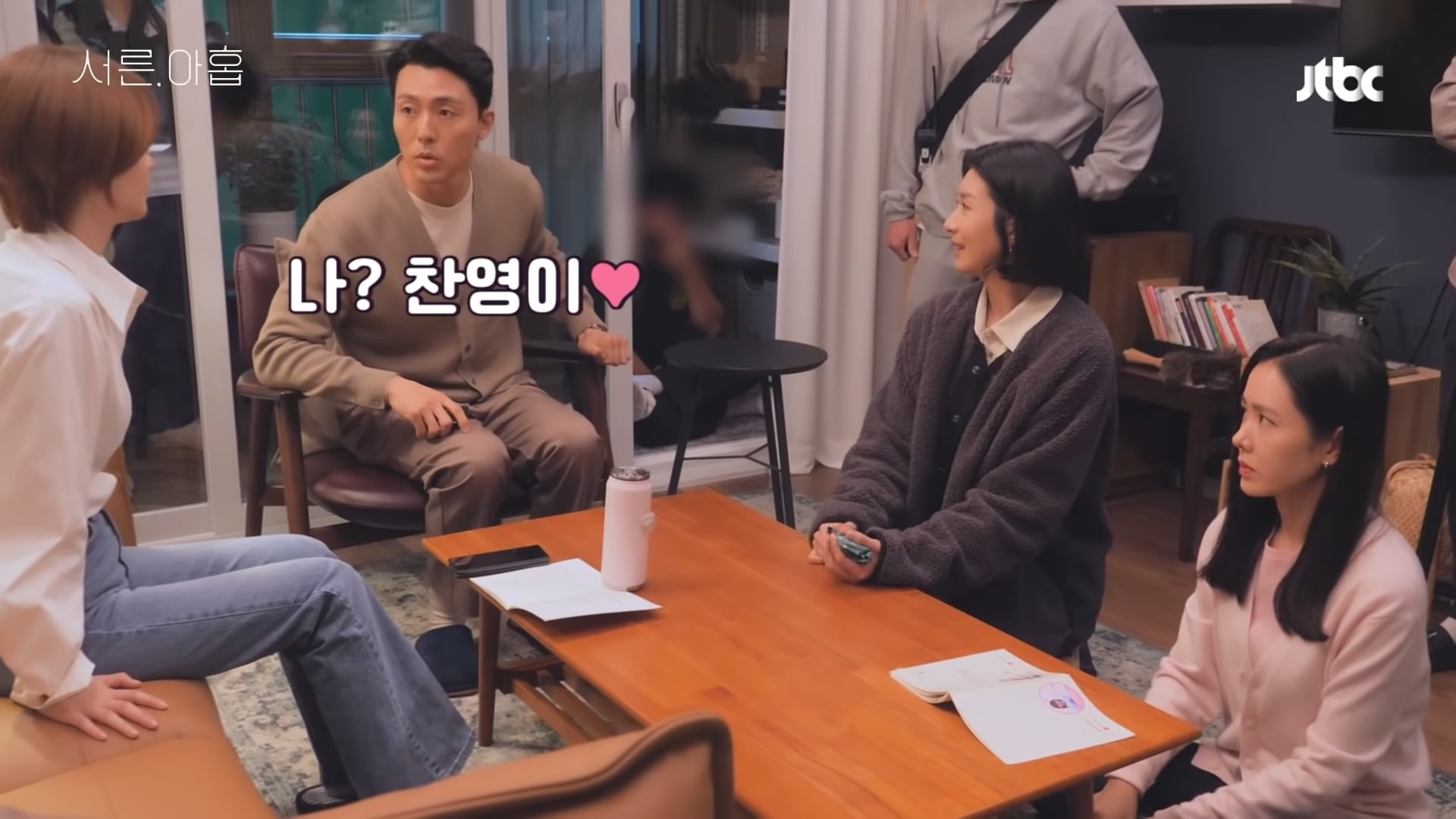 Jeon Mi Do throws the set into chaos when Son Ye Jin says, while in her role as Cha Mi Jo, “Where did my cell phone go?” Jeon Mi Do replies, “It’s probably in Jin Seok’s car.” Everyone looks at her in shock and immediately expresses their surprise the moment the cameras stop rolling. Jeon Mi Do looks pleased with herself as she exchanges a hi-five with Lee Moo Saeng.

The banter and laughter continue throughout filming as they tell jokes and swap stories. Son Ye Jin talks about a scene where she had to kneel in front of Kim Jin Seok’s wife, and Jeon Mi Do asks if she went barefoot. Son Ye Jin replies that she wore socks, saying, “It’s autumn so it would be kind of weird for me to be barefoot.”

The conversation then turns to the food on the table as they wonder if it’s been warmed up. Kim Ji Hyun sneakily pokes one of the food props and whispers, “It’s a bit cold.” Lee Moo Saeng then points out that there are only three pieces of tofu, and they wonder in a serious tone why there would be so few pieces.

Watch the full making-of video below!

“Thirty-Nine” will take a one-week hiatus due to coverage of South Korea’s presidential election and will resume airing on March 16 at 10:30 p.m. KST.

In the meantime, watch Lee Moo Saeng in “The Crowned Clown” below: