SBS released new behind-the-scenes footage from the filming of “A Business Proposal”!

Based on a popular web novel that has been adapted into a webtoon, “A Business Proposal” is a romantic comedy about an office employee who goes on a blind date with her company’s CEO in place of a friend while hiding her identity. Ahn Hyo Seop stars as chaebol heir Kang Tae Mu, who has everything from looks and brains to wealth and business savvy. Meanwhile, Kim Sejeong stars as food researcher Shin Ha Ri, who stands in for her best friend and chaebol heiress Jin Young Seo (Seol In Ah) at a blind date with Kang Tae Mu. However, things are made complicated by an unexpected snag in their plan: Kang Tae Mu just so happens to be Shin Ha Ri’s boss.

In the beginning of the video, Kim Sejeong excitedly says that it is the second day of filming and that she will be filming with Seol In Ah for the first time. In the next clip, she sits across from Seol In Ah and asks her whether she prefers tteok (rice cakes) made with rice or flour. Seol In Ah counts to three before they both blurt out their answers.

The two actors give different answers before letting out sighs of disagreement. Kim Sejeong claims rice tteok is better while Seol In Ah thinks flour tteok is better. They both playfully argue and try to convince the other that they are right. Kim Sejeong points to the camera and says, “We’ll really need to take a vote on this.” Seol In Ah looks at the camera and says, “Everyone, please leave a comment! Let’s be fair and square and truthful. Are you a fan of rice tteok or flour tteok?” 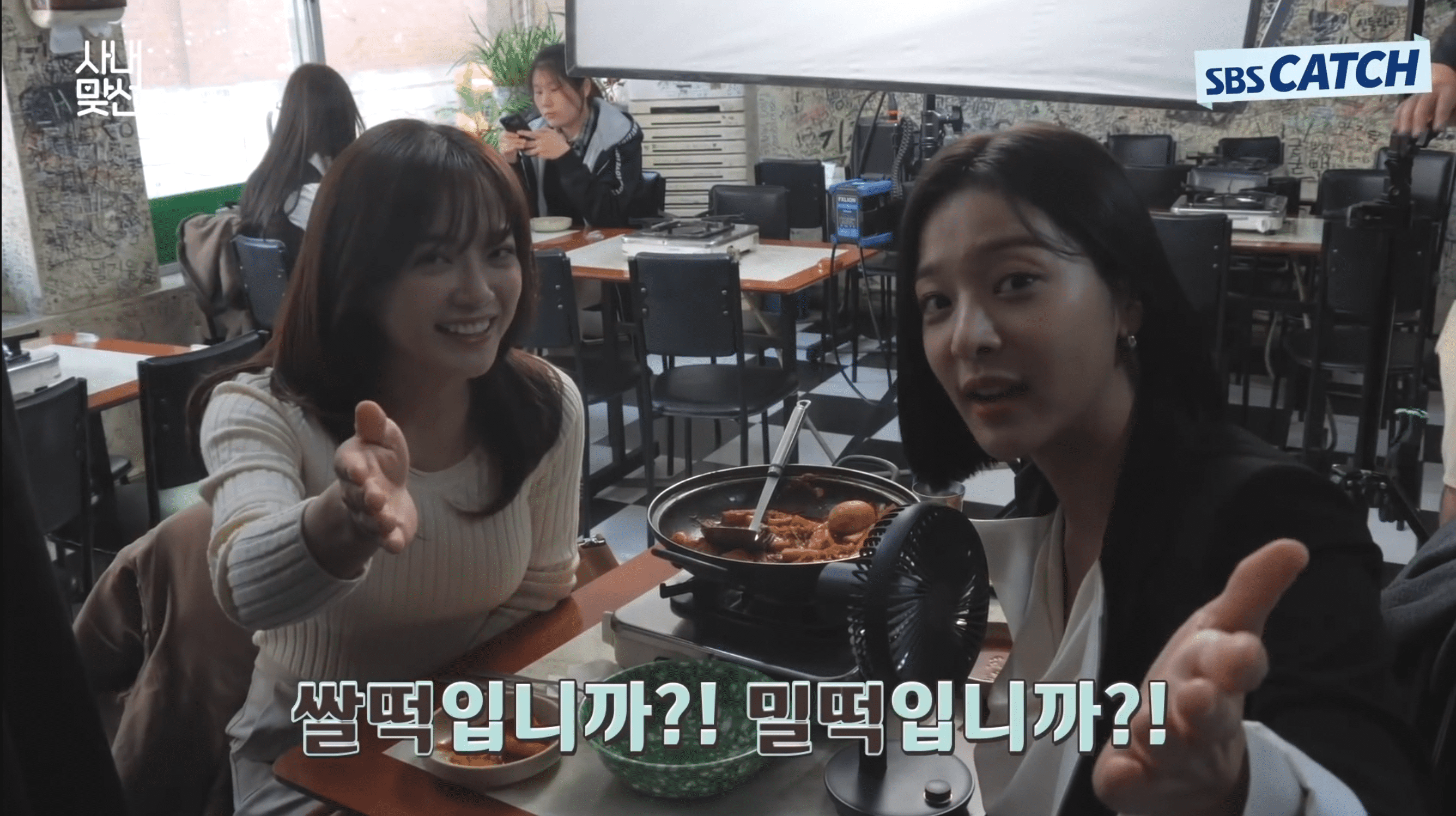 Later in the video, Kim Sejeong and Ahn Hyo Seop sit across from each other in a dimly lit restaurant and practice filming the scene together. Kim Sejeong practices handing Ahn Hyo Seop a credit card in different ways as the director watches them. While Kim Sejeong gets her makeup done, Ahn Hyo Seop leans over to the camera and quietly says, “Ha Ri is working really hard. She’s the best partner! I’ll also try to work harder!”

Kim Sejeong says, “So hot,” in English before fanning her hair back and forth. Ahn Hyo Seop remarks, “Your English pronunciation is really good!” Kim Sejeong says, “Mine?” before smiling brightly back at him. She adds, “When I was younger, I also won an award!” and laughs. 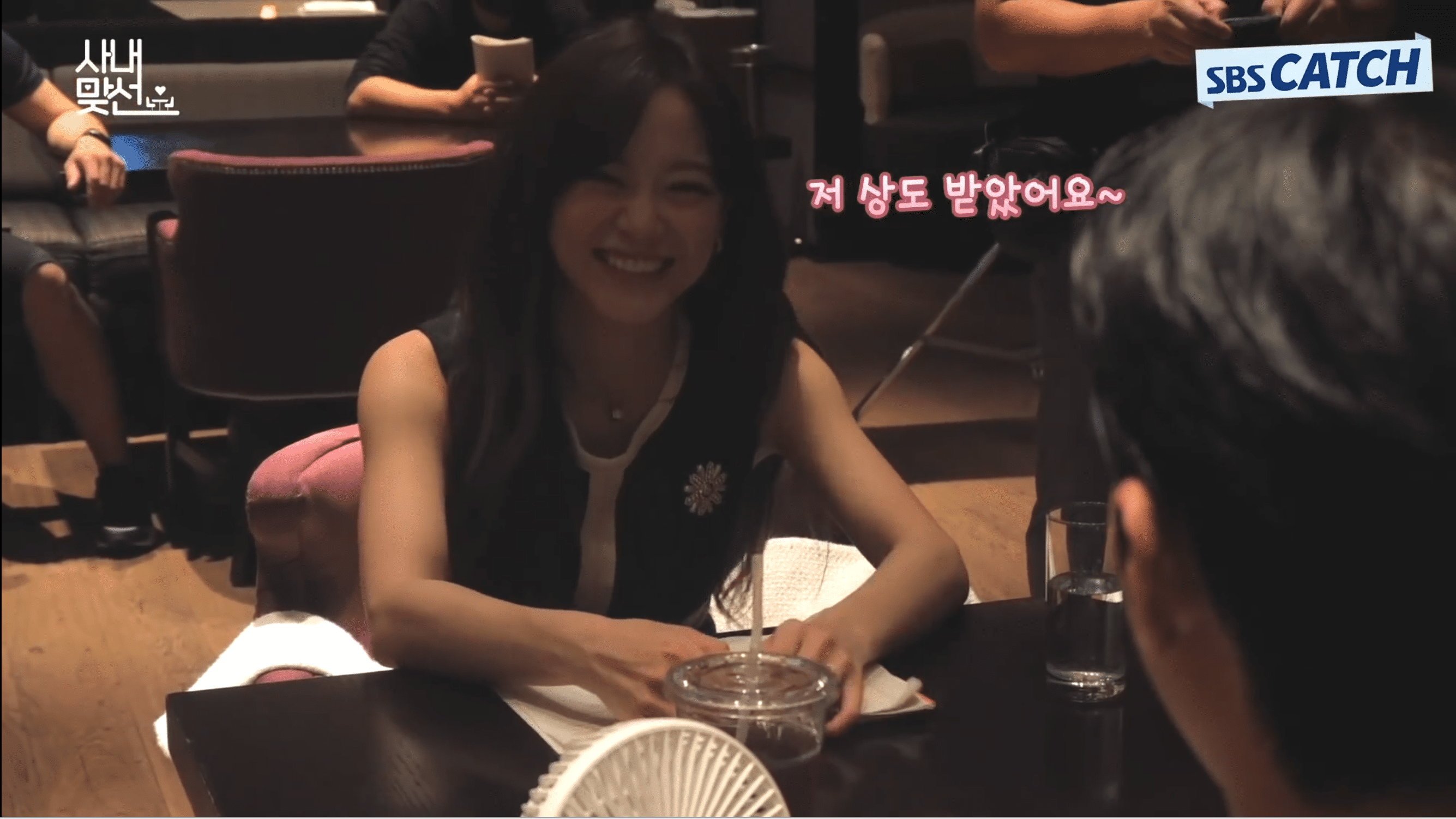 Towards the end of the video, the two actors practice a scene where Kang Tae Mu chases Shin Ha Ri. Kim Sejeong wears a white lab coat, and Kang Tae Mu holds her slipper in his hand. In one take, Kim Sejeong slips and falls down while running. Ahn Hyo Seop approaches her quickly and worriedly asks, “Are you okay?” She affirms that she’s okay and explains to the crew that her socks made her slip. A little later, the cameraman comes up to Kim Sejeong and comments, “You fell earlier.” However, Kim Sejeong jokes and says, “Me? When? What did you say? What? Who fell? Me?” The cameraman nods using the camera, causing Kim Sejeong to laugh in response.

Watch the full video below!

Watch Kim Sejeong in “I Wanna Hear Your Song“:

And check Ahn Hyo Seop in “Lovers of the Red Sky“: