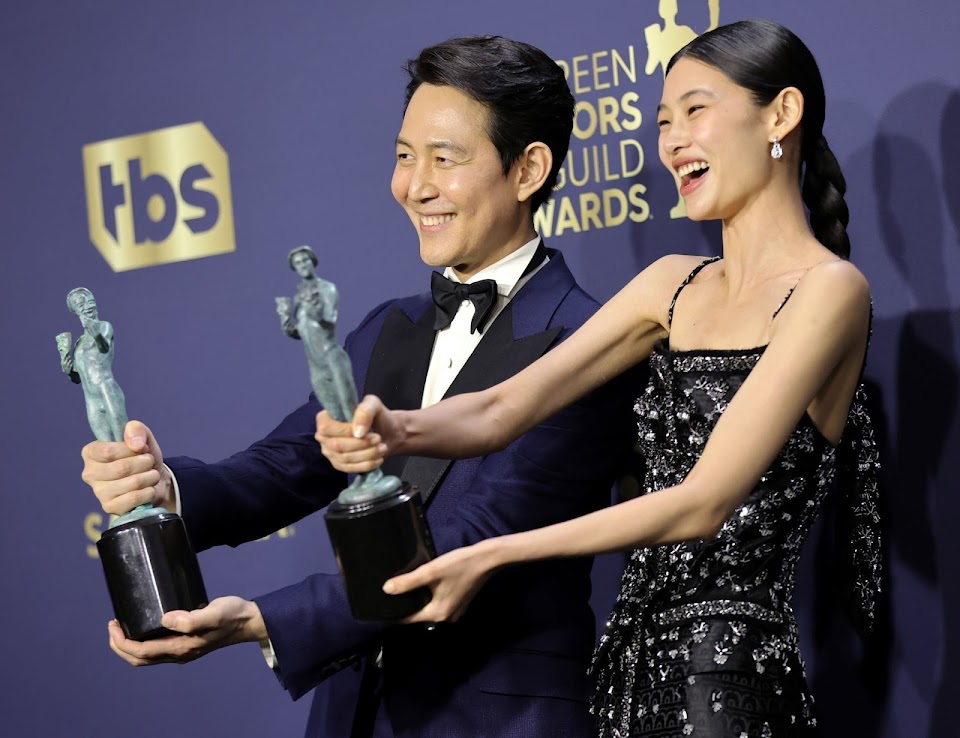 Last year, Netflix‘s Squid Game took over the globe. Now, it’s taking the Screen Actors Guild Awards (SAGA) by storm! Squid Game won three of the four awards they were nominated for. Here, in no particular order, are 10 of the cast’s best moments at the show!

Squid Game‘s lead actor won “Male Actor in a Drama Series” for his role as Seong Gi Hun. He was thrilled to take home his trophy!

If anybody was more excited for Lee Jung Jae’s win, it was his team. They gave him all their love, cheering him on.

3. Jung Ho Yeon’s reaction to winning “Outstanding Performance by a Female Actor in a Drama Series”

After going up against Jennifer Aniston, Elisabeth Moss, Sarah Snook, and Reese Witherspoon, Jung Ho Yeon took home the prize. She played Kang Sae Byeok, one of the most beloved and complex characters on the show.

An Access Hollywood reporter asked, “Now that you’re SAG winners, what are you going to miss the most about being anonymous?” Neither Lee Jung Jae nor Jung Ho Yeon are rookies in the entertainment industry. Lee Jung Jae is a veteran actor and Jung Ho Yeon a seasoned model-turned-actress.

How did Jung Ho Yeon reply? She simply said, “Nothing!”

Attending SAGA seemed to be much more fun than fighting for their lives in Squid Game!

She was a little nervous meeting Cate Blanchett, whom she would like to work with someday.

Jung Ho Yeon saying she wants to work with Cate Blanchett and that she met her backstage being real sweet and nice 💖#SAGAwards pic.twitter.com/s5AH7q9yri

Awesome view of the SQUID GAME team going nuts as Lee Jung-jae is announced as the best actor in a TV drama series SAG Award! pic.twitter.com/yGej9hRfa6

8. Jung Ho Yeon being the best kind of dramatic

‘Squid Game’ star Jung Ho-Yeon collapses to the ground as she hugs Lee Jung-Jae after they both win #SAGAwards. pic.twitter.com/i0Kk04zEva

…is making ours beat faster!

10. All aboard the TikTok trend!

Look at them joining a TikTok trend meanwhile Lee Jung Jae just bending down because he is shy🥺 pic.twitter.com/m5s6Kcc9IB