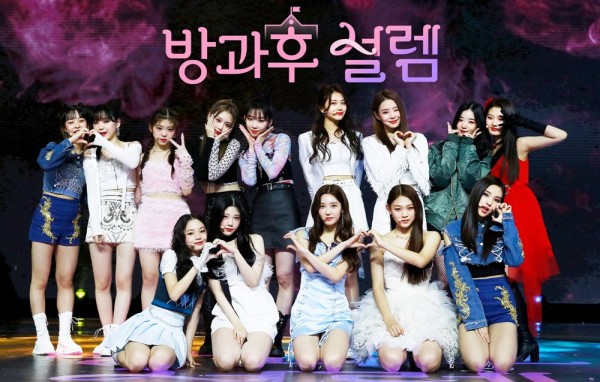 On February 27, MBC aired the finale of their series My Teenage Girl. The final contestants went against each other in a final mission to determine which of the members would make it in the debut lineup of the show’s girl group, CLASSy.

During the show, there were two teams which were the “Debut” and the “Challenger” team. The “Challenger” team performed the song “Sun” during the finale. It was introduced as an original song produced and written by (G)I-DLE member Soyeon, who is also a mentor on the show.

However, after the track was shared on social media, the song was met with criticism from fans of the K-Pop group ATEEZ. According to ATINYs (ATEEZ’s fan base), the chorus of the song “Sun” was extremely similar to ATEEZ’s hit 2019 song “Wave.”

In particular, after putting the two clips together, fans noticed that not only was the melody and rhythm the same but the signature “Oh Oh” used in “Wave” was also heard in the My Teenage Girl track.

I love Soyeon and the girls (my teenage girls) , they are soo talented which I cannot disagree that but…. this sounds sooo same.. mybe intentionally or unintentionally. I need some explanation plis. SUN x WAVE #ATEEZDESERVESBETTER #ATEEZ #MyTeenageGirl #SUN #WAVE pic.twitter.com/HRu9fXrttk

When the video was released, ATINYs raised their concerns on social media. Although many were quick to explain that they weren’t accusing the show of plagiarism, they wanted to know whether KQ Entertainment was aware of the issue.

In particular, many wondered whether the melody was an available sample that could be used, or it was taken from the KQ production team Eden-ary, who are known for producing ATEEZ’s biggest hits, even though they weren’t credited on the show.

no cause this isn’t just a “small similarity”, it’s so obvious that the melody and lyrics got copied and it hurts even more when you realize ateez got their first win with wave like.. this song means a lot to them

1. wave was never available for sampling.
2. even if it was, melodies n lyrics can NOT be sampled, only copied.
3. edenary would be credited only if Sun was explicitly a cover of wave, which it wasn’t. it was advertised as “original” instead.

the whole case is an abnormality+

Although fans were grateful to see the issue addressed, many wanted to know what had really happened regarding the use of the music associated with “Wave.”

On February 28, KQ released a statement regarding the issue after they received reports from fans that the chorus melody of “Sun” was similar to ATEEZ’s ‘WAVE’, which was released in 2019.

According to the statement, although Eden-ary was listed in the credits, there was no prior discussion about the use of melody.

On the 27th, the Challenge Team(?)’s stage, called ‘SUN’, was broadcast for the first round of the FINALs on My Teen Girl. Afterward, we received multiple reports through the company’s official channel and mails from webmasters that the song’s chorus melody was similar to ATEEZ’s ‘WAVE’, which was released in 2019.

As the company was monitoring the related issue, they discovered that the company’s producing team, Eden-ary, was listed in the credits for ‘SUN.’

We want to clarify that we did not have any discussions before with the company or Eden-ary. In hopes of respecting creators and their unique works and in hopes that any misinformation can be corrected, we ask everyone to refrain from making unreasonable assumptions regarding the issue.

The statement was welcomed by ATEEZ fans who wanted to know what was happening, especially as “Wave” is seen as an important track for both the group and the fans as it earned them their first win in 2019.

Although KQ Entertainment has released a statement, MBC has yet to address the issue.