The stars of upcoming drama “Crazy Love” (literal title) are looking crazy good in a new feature in Cosmopolitan!

Kim Jae Wook and f(x)’s Krystal previewed their characters’ intensely passionate relationship in the interview that followed, covering topics from their roles, how they compare to their characters in real life, and more.

Being his first drama in two years, Kim Jae Wook was especially excited in describing what about the series drew him in. He explained, “Thankfully, I had a lot of offers come in while I took my break. And before I knew it, two years had gone by. I really didn’t want to take a break. I also think I experienced a bit of the COVID blues myself. So, rather than a series that’s dark and serious, I was looking for a project that we could watch without thinking much about and laugh. That way, both the viewers and I would enjoy it. And that’s when the script for ‘Crazy Love’ came in.”

The plot was enough to draw not only Kim Jae Wook, but of course also Krystal. She particularly seemed fond of her own character, which she describes as “a person that is diligent in her work as a secretary but is shy and unable to speak her mind.” But after this character finds out that she doesn’t have much time to live due to an illness, she transforms into someone that lives out her own agenda. Krystal added, “I was more convinced that I wanted to take on this role because it’d allow me to express both sides of the character.” 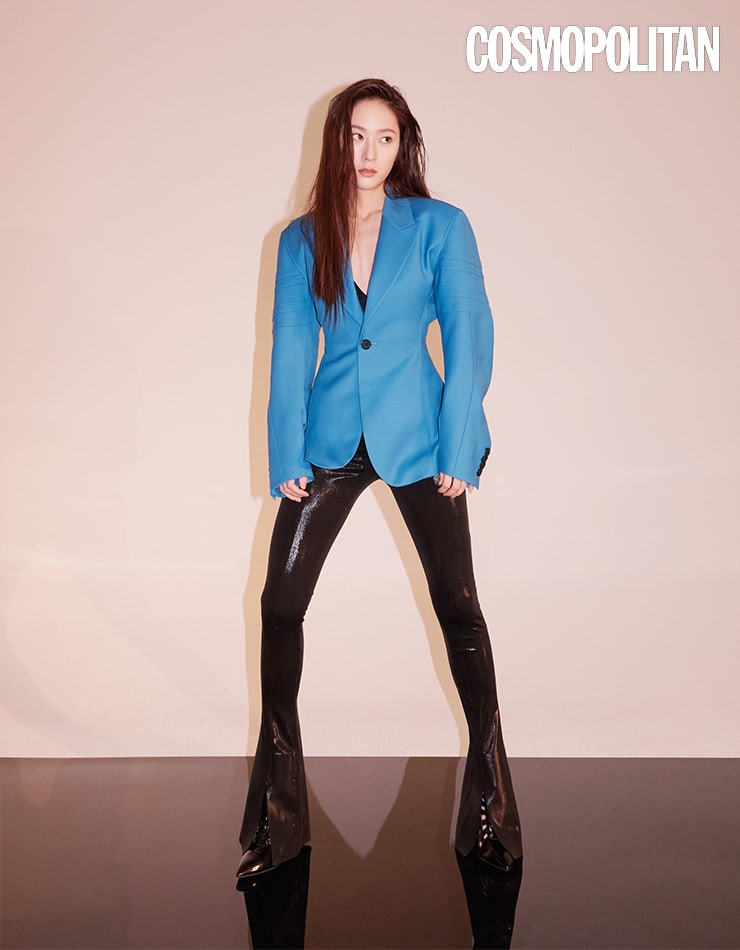 Their discussion of their roles quickly transitioned into a discussion of love, as Kim Jae Wook attempted to identify a moment in time where he felt like, “I really love this person.” After much contemplation, he shared, “I’d have to say, a moment where you put in effort to understand that person? When I find myself trying to understand someone that has lived apart from me, in a different world, for such a long time.”

Krystal agreed, adding, “I’m the type of person that would ask, ‘Why aren’t you doing the same for me?’ when the other person isn’t reciprocating my feelings.” She further explained, “When the other person doesn’t do for me what I already have in mind for what I want, then I tell them, ‘You need to do this like this!’ I realized that if you don’t verbalize it, they won’t know.” 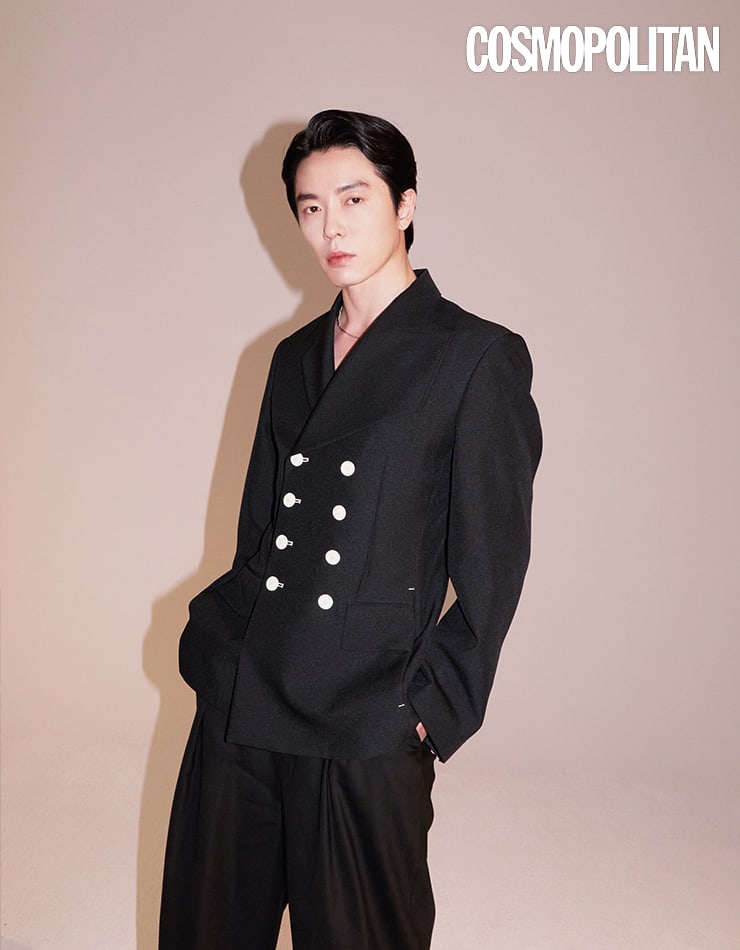 The idol-turned-actress also took time to explain what she thinks of being defined by two separate names, the names being Krystal and Jung Soo Jung. She stated, “To me, both Jung Soo Jung and Krystal are both so me. I debuted as Krystal, so I can’t help but be Krystal. And I find it so cringey to forcefully say, ‘I’m an actress now, so call me Jung Soo Jung! It’s Jung Soo Jung! Also, I like my name Krystal.”

Regarding the label “idol-turned-actress,” she stated, “I really don’t mind it. Also, I’d say I’m pretty proud of it. Because it just means that I can do both. Rather than hide it, I prefer the attitude of being like, ‘I’ve done this and now I can do this, too!’ Plus, if that label was a negative one, wouldn’t I not have been able to join this project along with Kim Jae Wook? When it comes to this, I think I’m the type that just trusts myself and pushes on.”

From debuting in the 2002 drama “Do It All Your Way” to taking on his most memorable role in “Coffee Prince” as Noh Sun Ki and returning as Noh Go Jin in “Crazy Love,” Kim Jae Wook also shared details on how he developed as an actor over the years. He didn’t forget to thank his first acting coach, who he met while he was working as a model. 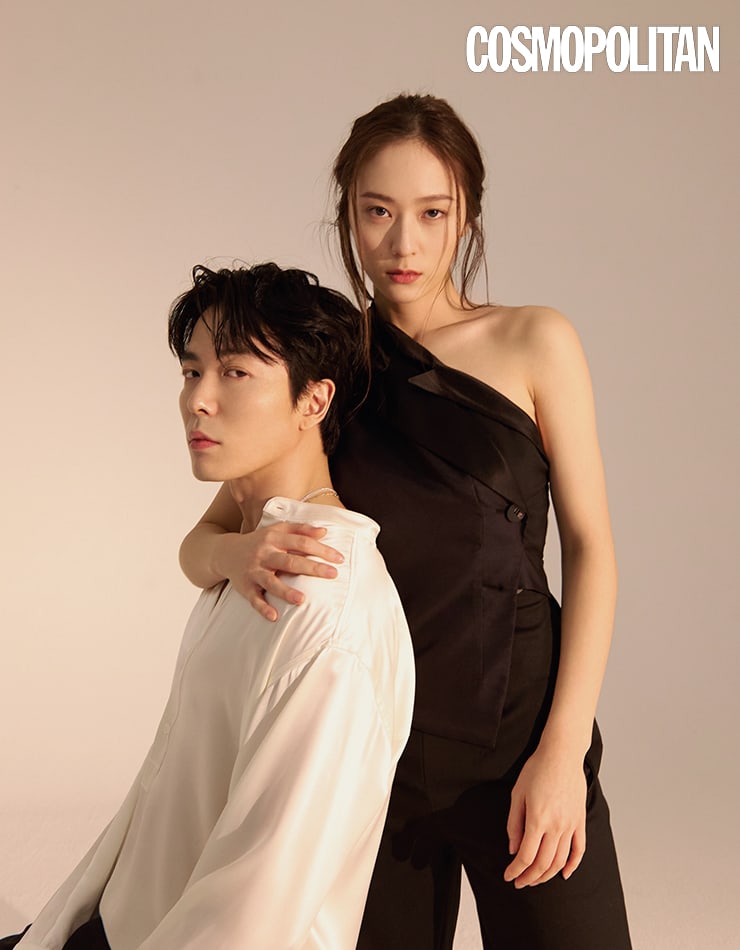 While reflecting on their journey and growth as individuals, Krystal shared that “Simple is the best” is one of her mottos. And as this year is the last of her twenties, she took time to look back on her past decade. She commented, “The funny thing is, I look at some posts I made seven years ago and think that they’re still so relevant. It’s so me. I often question, ‘Have I really grown up?’” She added that people around her have even commented that she hasn’t changed much over the years. As for music, she said, “A lot of things happened in unexpected ways. But I can always do music again. I’m that type that goes with the flow.”

As for how he is feeling about turning forty, he commented, “I’ve just been feeling that I’m at a point to take on my forties and do it well. Rather than obsess over becoming the person my twenty year old self wanted to be, I want to look into myself as the way I am and accept it. I want to contemplate how I can be happy and make more decisions that are made for myself.”