Song Kang Gets Into Tense Confrontation With Yoon Bak And Girl’s Day’s Yura In “Forecasting Love And Weather” : Entertainment Daily

JTBC’s “Forecasting Love and Weather” has shared a sneak peek of a heated moment from its upcoming episode!

“Forecasting Love and Weather” is a new romance drama about the work and love lives of people who work at the Korea Meteorological Administration, Korea’s national weather forecast service. Park Min Young stars as the frosty Jin Ha Kyung, who does everything by the book and is fastidious about keeping her personal and professional lives separate, while Song Kang stars as the free-spirited and determined Lee Si Woo, who boasts an impressive IQ of 150 but only cares about the weather.

Previously on “Forecasting Love and Weather,” Jin Ha Kyung’s fiancé Han Ki Joon (played by Yoon Bak) and Lee Si Woo’s girlfriend Chae Yoo Jin (Girl’s Day’s Yura) got into an affair, cheating on their respective significant others with one another. After ending both relationships, Han Ki Joon and Chae Yoo Jin got married, making things extremely awkward at work. To make the entire situation even more complicated, Jin Ha Kyung and Lee Si Woo began secretly dating after they wound up working together on the same team.

On the latest episode of the drama, Han Ki Joon discovered that his wife had lied about her relationship with Lee Si Woo, not wanting her husband to know that they had been romantically involved. Even when Han Ki Joon had recognized Lee Si Woo as the guy who interrupted their wedding to run off with the bouquet, Chae Yoo Jin had insisted that he was mistaking him for someone else—but when Han Ki Joon found an old photo of the couple in one of Chae Yoo Jin’s books, the jig was up.

In newly released stills from the drama’s next episode, Han Ki Joon angrily confronts Lee Si Woo about something as Chae Yoo Jin nervously looks on. As Han Ki Joon is both the guy who stole his past girlfriend and the ex-boyfriend who broke his current lover’s heart, Lee Si Woo isn’t exactly his biggest fan—and he shows no signs of backing down as he glares right back at him. 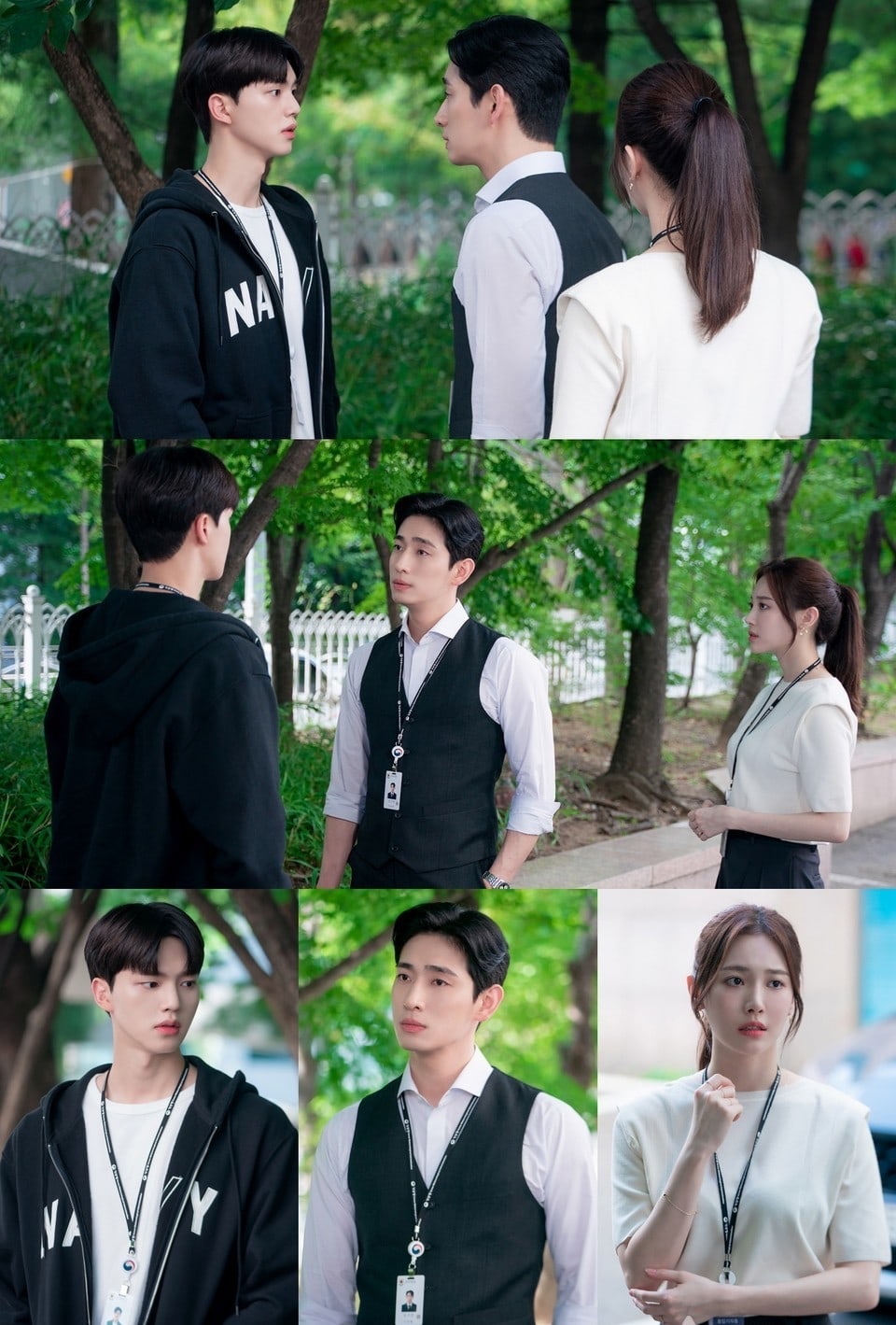 The producers of “Forecasting Love and Weather” teased, “[In Episode 5], Si Woo and Ki Joon and Yoo Jin will face off in one place. Because of their entangled relationships, you can practically see the sparks flying just by looking at them. Please keep an eye on the tension between the three people, which will explode in tonight’s episode.”

In the meantime, watch Yura in her previous drama “Now We Are Breaking Up” with subtitles below!