Kim Jae Wook recently talked about his role in the upcoming drama “Crazy Love” (literal title) and how he prepared to play his character.

“Crazy Love” tells the story of a sweet yet savage and chaotic romance between a rude but skilled instructor who receives a death threat and his terminally ill secretary. Kim Jae Wook stars as Noh Go Jin, the narcissistic CEO of the education company GOTOP and the top math instructor in the country with an IQ of 190. f(x)’s Krystal plays Noh Go Jin’s secretary Lee Shin Ah, who does not have much of a presence.

When talking about the reason he chose this drama, Kim Jae Wook explained that he wanted to give viewers something they could laugh at. He said, “Because it’s a difficult time, I wanted to appear in a project that can make viewers laugh a lot rather than a project that is dark, and while feeling that way, I came across ‘Crazy Love.’”

He described his character as “a person who doesn’t trust people” and a “thorough businessman.” While he’s a genius that has an IQ of 190, Noh Go Jin doesn’t try to understand others because he is egocentric, and he lacks human leadership. In order to make a physical transformation into the character, Kim Jae Wook shared that he spent time researching for the role. He explained, “I looked and researched a lot about the instructor job, but in the process I found out there’s no specific framework for it [in terms of styling].” Because of this, he focused more on Noh Go Jin’s personality.

The newly released poster for the show illustrates Noh Go Jin’s narcissistic and slightly abnormal personality. He looks well put together, wearing a suit and fixing his tie in order to maintain a meticulous appearance, as he glances at the camera condescendingly. The caption on the top right side of the poster, which appears to have been scratched in, reads, “You’re going to kill me?! Me? I’m ‘IQ-of-190’ genius Noh Go Jin!” It’s clear that even though he has been threatened with murder, he doesn’t take the threat seriously. 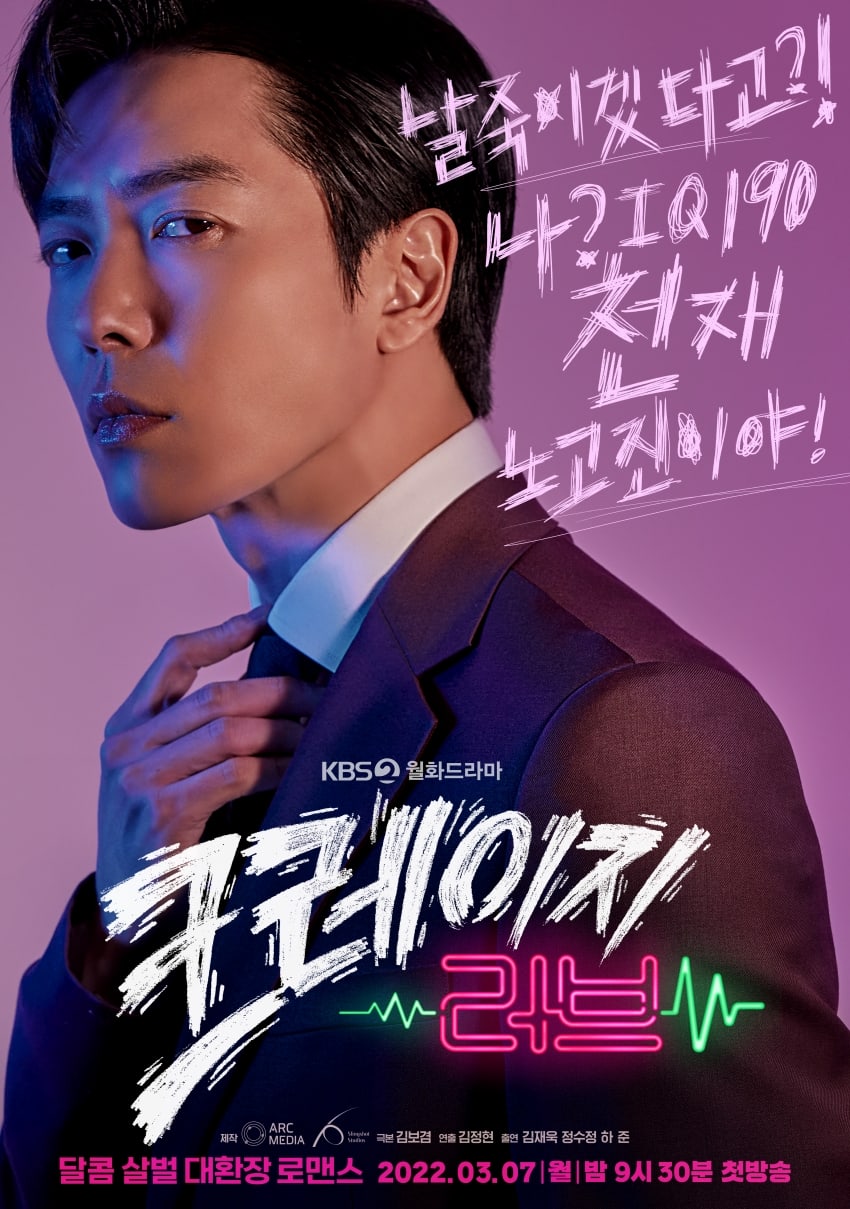 At the end of his interview, Kim Jae Wook said, “I always want to show a new side of myself, even just a little bit, so I’m trying not to act in a familiar way. I will keep improving so that viewers can experience a new kind of fun.”

Describing “Crazy Love,” he continued, “At the beginning, it’s a drama with a lot of comedic elements. I hope it will be a drama that makes you laugh like crazy, get attached to the characters, and completely fall into the story. Please look forward to the unique romance of ‘Crazy Love.’”

While you wait, check out Kim Jae Wook in “Her Private Life” below!