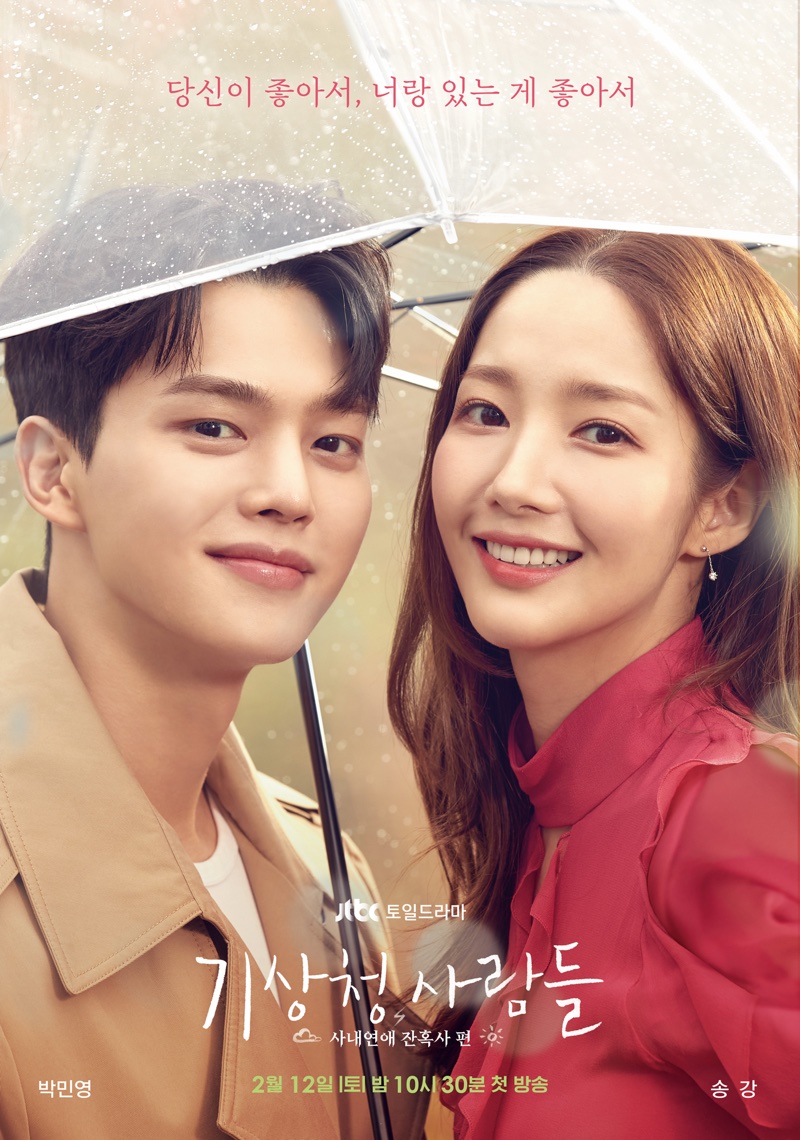 K-Dramas are definitely taking the world by storm, and it seems like netizens can’t get enough of the influx of new content being released. One of the most recent shows to gain attention is Forecasting Love And Weather, starring rising star Song Kang and much-loved veteran actress Park Min Young.

Forecasting Love And Weather shows the journey of love between a diligent forecaster and her free-spirited coworker. The show has already gained attention for the chemistry between the two leading characters and their undeniable visuals…

But also the steaminess of the show. Netizens have praised the show that breaks away from the traditional conventions of K-Dramas. It seems to fit the angle by the likes of Nevertheless and Loves and Leashes.

One of the biggest surprises to fans was that the two main characters kissed within the first few episodes, which isn’t normally seen in K-Dramas. In a video from JTBC, the company showed fans behind-the-scenes action from filming the duo’s first kiss.

During the video, the two are practicing their kiss and as they leaned in to try and find the right angle, Park Min Young burst into laughter as they tried to figure out the best way to do the scene.

Even as they start acting out their parts in a scene where the two are meant to be drunk, Park Min Young showcases her adorable side as she starts laughing again as Song Kang makes his way out of the bar.

Yet, even though both actors seemed to be having fun together, Park Min Young also showcased her professionalism by guiding the less experienced Song Kang through the scene and adding her own guidance, improving the chemistry in the scene.

Of course, no matter how experienced Park Min Young is, there were always some funny bloopers, and one came in this scene. When they went to start the scene, it all seemed to be going well as Park Min Young and Song Kang channeled their inner “drunkness.”

However, in the midst of their acting and immersion into the character, Song Kang accidentally causes a blooper. In the scene, he is meant to say, “Can I kiss you?” but is caught up in the moment. Instead, he asks, “Can I do that?” When everyone realized what had happened, the cast and crew laughed at the mistake.

Luckily, they managed to compose themselves again and shoot a picture-perfect scene, and there is no denying that their chemistry was undeniable when they finally kissed. It perfectly combined comedy, passion, and intensity seen throughout the rest of the series.

It seems as if no matter how intense a K-Drama is, the behind-the-scenes always show a stark contrast to what is seen on the screen. The reality of filming this epic kiss was worlds away from the steaminess that viewers saw in the K-Drama, and it shows the duality of both Song Kang and Park Min Young.

You can watch the full clip below.