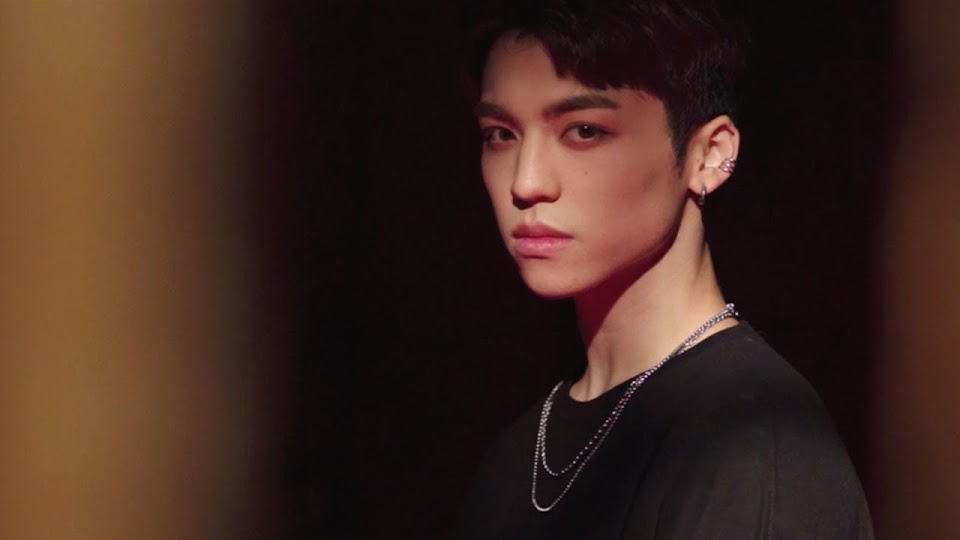 Beomhan is a Chinese American rapper trainee under FM Entertainment. He is a member of the pre-debut group M.O.N.T Arena.

While he has not officially made his debut yet, you may already know Beomhan as he did a tour around the United States last year with soloist Jay Chang. They frequented K-Pop festivals and events, working as baristas and waiters, as well as performing as part of their Kpop Rookie Trainee Show.

Beomhan especially lives on our TikTok FYPs. He regularly hosts live broadcasts on social media, including the video-sharing app and Twitch. Both he and Jay have their own TikTok accounts, too, often participating in trends.

Despite being known for his charisma and joyful personality, something terrible happened to Beomhan recently. Near the end of his U.S. tour, he was the victim of a hate crime.

During a live broadcast on February 12, Beomhan recounted the experience after getting company staffs’ permission. He then explained how he got the scratch on his neck.

If you’re in New York, please be careful… I don’t even know how to begin telling this story. So, I have this scratch on my neck, right? I was attacked by a homeless man on the train. It was kind of funny in like retrospect, but then like, in the moment, it was super scary…

Beomhan and the staff were traveling on a train together. He was chilling and listening to music when a homeless man entered.

So, I was sitting down on the train, staff next to me, and I had my headphones…

Beomhan said that he didn’t pay the man too much attention. He only remembered that the man began to talk to others on the train.

Despite minding his own business, the man targeted Beomhan suddenly. Although he had been listening to music, Beomhan could hear the man talking about him.

He starts talking to the people in front of us … and he points at me. Because I have my headphones in, he didn’t think I could hear him…

Beomhan was dressed normally. Yet, his white jacket must have made him stand out from the crowd because the man began to make derogatory remarks about Beomhan’s appearance.

The homeless man verbally attacked Beomhan with homophobic remarks. Yet, the man then attempted to beg Beomhan for money.

And I was like, ‘Okay, this is a little bit weird, but…’ He was kind of like making fun of me, and then he was like tapping the people in front me like, ‘Watch this.’ And then he went up to me and was like, ‘Yo, man, you got any change?’ which is like kind of funny because like review your script…

Beomhan felt the approach was unusual. Why did the man first approach him maliciously then request something of him? Still, Beomhan responded respectfully and asked the man to give him space and refrain from using offensive language towards him.

This made the man more aggressive towards Beomhan. He actually got so close that Beomhan was concerned that he was about to be sexually assaulted.

The homeless man didn’t kiss Beomhan as he feared. Instead, he pretended to punch Beomhan, causing him to cry out in reflex.

And then he took his hand, and he liked pretended to punch me … And I was like, ‘Whoa!’ And he’s like, ‘Yeah, that’s right!’

After this, the man then physically attacked Beomhan for real. He choked Beomhan, resulting in the scratch on his neck.

And then he took his hand, and he choked me, which is a weird form of attack like if you’re in a public setting like first, you call me like kind of flamboyant … and then your form of attack is choking me like, ‘Thanks, I guess.’ And then his fingernail like cut my neck.

Beomhan felt that the whole thing was premeditated. He was clearly targeted with both racial and homophobic slurs.

It was like a very in and out operation like he got on at like 34th Street and then he like did his whole rounds, he choked me, then got off on 22 right after. This was planned…He’s very efficient. He didn’t even go around to the other guys. He just went around, talked to like three people like ‘Yo, look at this guy kind of dressed funny.’ That’s not the word that he used. He’s like, ‘Wow, look at this Chinese guy.’ That’s also not the word he used.

After the live broadcast, some fans spoke up on Beomhan’s behalf. While he laughed it off, he did so because he had just experienced a traumatic experience and was uncomfortable. His response and coping method don’t downplay the severity of the situation.

Beomhan was attacked verbally and physically just bc he’s laughing it off doesn’t mean y’all should, imagine how he felt 🙁 the staff shouldn’t let him walk around by himself there’s so many weird shitty people out there, I hope everyone who met him that day showed lots of love

Fans are concerned for multiple reasons. Some have noticed others downplaying the traumatic event for humor, laughing like it’s any of Beomhan’s “funny antics.”

Beomhan coming out about how he got called slurs and physically attacked while he was in NYC and the comments laughing, just because he’s laughing about his trauma doesn’t mean you get to as well…

Most of all, they’re concerned about the staffs’ response to the situation. Questions are being raised about the artist’s protection. Firstly, Beomhan took public transportation, but why were things also allowed to escalate so far that he was physically attacked? Many feel staff should have intervened.

beomhan got attacked/called all types of racist names in nyc and he’s laughing it off because he’s beomhan but this isn’t it :/ I hope staff doesn’t let him walk around by himself anymore this is really traumatic.. pic.twitter.com/sk0nMKfQSv

It’s been about ten days now since the incident. Yet, some are just now hearing about it and are attempting to bring awareness.

Fans on TikTok have begun trending a hashtag as a result. Currently, “#justiceforbeomhan” is being used on related videos.

And the fact that he laughed it off on live honestly hurt. It just sucks cause the more he’s getting known the worse it could get! 💔 #justiceforbeomhan #beomhan #beomhanfm #fyp #kpopfyp

He deserves so much better. #justiceforbeomhan

Previously, Jay Chang was mugged while livestreaming. Read more below:

Watch Beomhan recount the experience below:

A previous version of this article mislabeled Jay Chang as an FM Entertainment artist. While he’s part of FM’s tour events, he is signed under Global H Media.