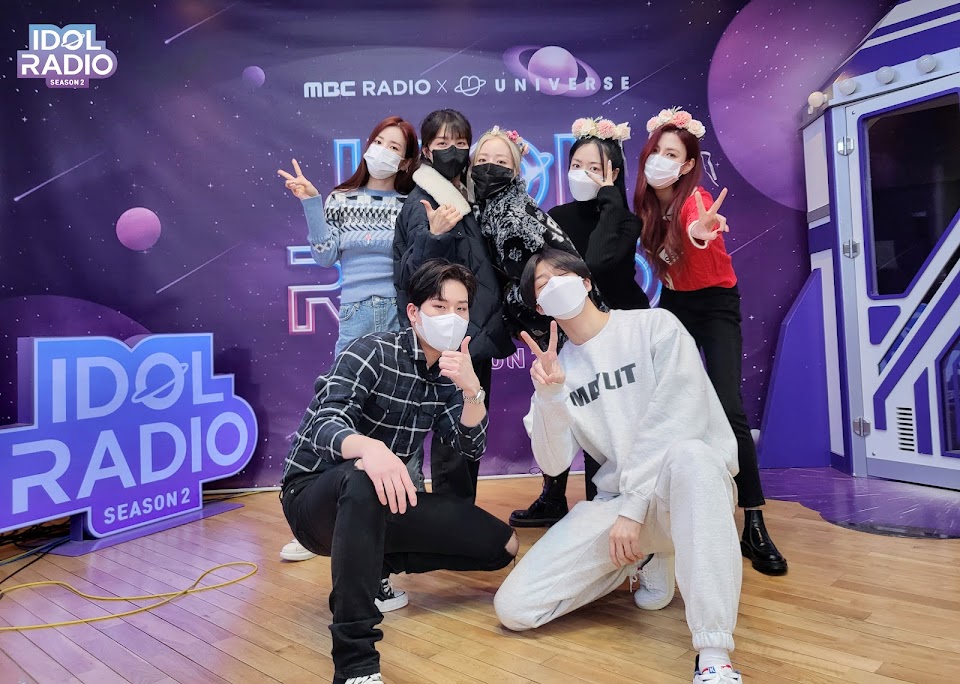 Apink recently went on Idol Radio to promote their new comeback, “Horn,” and ended up having plenty of fun with MONSTA X‘s Joohoney and Hyungwon, who host the radio show together.

While the members from both groups all seemed to get along, fans were particularly delighted by the great friendship between Apink’s Bomi and Hyungwon, who have been friends for a long time.

In fact, they are so close that Bomi spent a good amount of time hilariously exposing Hyungwon in different ways, from his Instagram pictures to claiming that he’s actually wilder than Joohoney.

Bomi and Hyungwon’s friendship started off just as comically, with Bomi claiming that they initially bonded over a shared concern: atopic dermatitis. That friendship certainly seems to have grown a lot since then, with Bomi now saying that she considers Hyungwon a very reliable friend.

apink’s bomi mentioning monsta x’s hyungwon as her good friend when she was asked to tell her thoughts of releasing an album as an whole group in a year and 10 months and coming on idol radio 🥺🤍 pic.twitter.com/eNKJTEbgvH

That is probably the reason why, when asked about what they normally talk about together, Bomi jokingly threatened to ‘expose’ Hyungwon.

bomi and hyungwoon were asked what did they usually talk when contact each other and they were looking at each other and bomi was like “should i tell everything? is it ok hyungwon ssi?” they’re so cute pic.twitter.com/6leoIXUFNB

But then, of course, she really did. Bomi came for Hyungwon’s Instagram habits, teasing him for going to great lengths just to take some natural-looking ‘boyfriend concept’ photos.

Then she revealed his ‘true personality,’ joking that it’s a shame that MONBEBES don’t know that Hyungwon is actually ‘wilder’ than Joohoney.

JH: how would you define Chae Hyungwon in one word

Of course, Hyungwon teased right back, hilariously correcting her when she confused two of MONSTA X’s songs.

Bomi: dramaramaramrama ( 드라마라마라마라마랑
🐢: I’ve been trying to fix it for years

But at the end of the day, Bomi claimed that Hyungwon was a true friend whom she feels she can count on, even when other people come and go.

jooheon asked bomi to describe hyungwon in one word and she said ‘real’ because she has been in the industry for so long she experienced people come and go in her life but hyungwon has always been a real and true friend to her 🥺💖 pic.twitter.com/eugaxIgqsB

She even added that she often watches MONSTA X because of Hyungwon, and that she and the members of Apink even went to their concert!

🐥: not only close with hyungwon but there’s btopink we’re also very close with btob but these days bcs of hyungwon i search for mx a lot, chorong unnie too and also our members like mx a lot
👥: really?!
🐥: yeah we also went to your concert
👥: we support apink too! pic.twitter.com/ry3RGaXfyQ

…and plenty of funny moments while dancing!

All in all, Apink’s visit to Idol Radio was full of fun and wholesome moments, right down to the way Jooheon’s ears reddened at one point. We can’t wait for Apink’s next visit to the show, if at least to see more of Bomi and Hyungwon’s great friendship!