Watch: Rain, Kim Bum, Uee, And More Impress Each Other With Comedic Timing On The Set Of “Ghost Doctor” : Entertainment Daily

“Ghost Doctor” has shared a new making-of clip for episodes 13 and 14!

Helmed by “Heirs” director Boo Sung Chul, tvN’s “Ghost Doctor” is a fantasy medical drama about two doctors who could not be more different in terms of their backgrounds, skills, or personalities, but who end up combining bodies and spirits. Rain stars as genius thoracic surgeon Cha Young Min, while Kim Bum plays silver-spoon resident Go Seung Tak.

The video begins with Sung Dong Il teasing Rain for being unable to keep a straight face during a serious scene. Later on in the hospital, Apink’s Son Na Eun films an eating scene with Uee. When they get ready to eat, Uee tries out some ad-libs by asking what restaurant the food was from and why they would eat tteokbokki (spicy rice cakes) in the morning, which makes everyone burst into laughter.

In another scene, Kim Bum and Son Na Eun grow embarrassed at their lines hinting at a confession, with Kim Bum pointing out, “There’s no soul in your voice.” A later clip shows Rain testing Uee’s patience as he motions for her to lean over the hospital bed, only to shoo her away moments later. After filming the scene, she says, “I was too desperate, as if he had actually died,” which causes Rain to bolt upright. 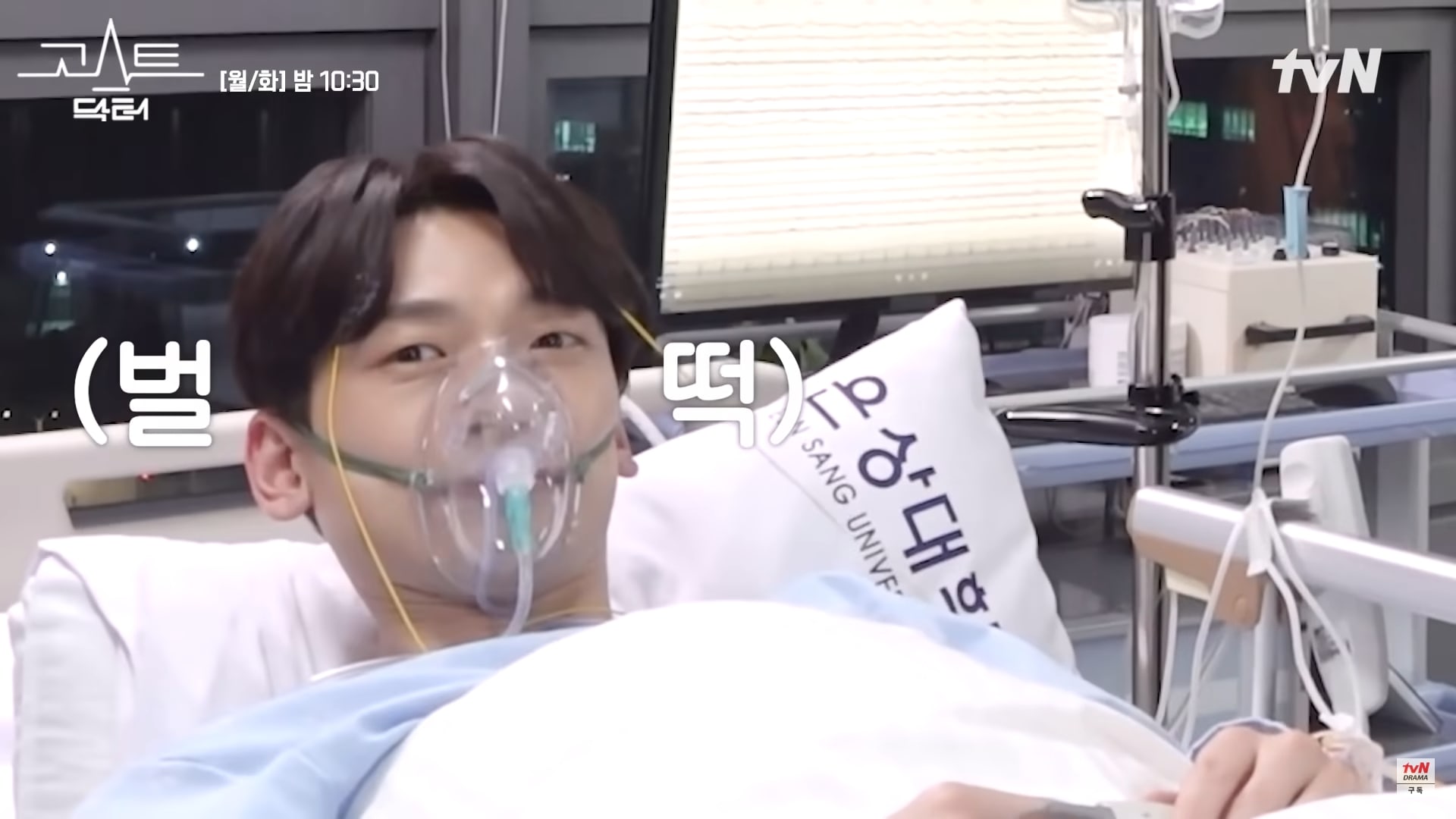 Next up, Kim Bum practices his suture technique on bananas and balloons. All the while, Rain sits nearby watching him with varied levels of amusement. While filming with the banana, Kim Bum begins talking to the banana, saying, “You’re doing great!” Rain plays along as he jokes, “The banana is really doing a great job,” as the staff break into laughter.

In the following balloon scene, Kim Bum’s sudden popping of the balloon causes Rain to fall out of his chair in real surprise. Rain remains froze on the floor in shock before asking if the cameras were rolling. Although they weren’t, the staff assure him that the moment would be included in the making-of video. The two actors then recreate the moment for the actual scene. 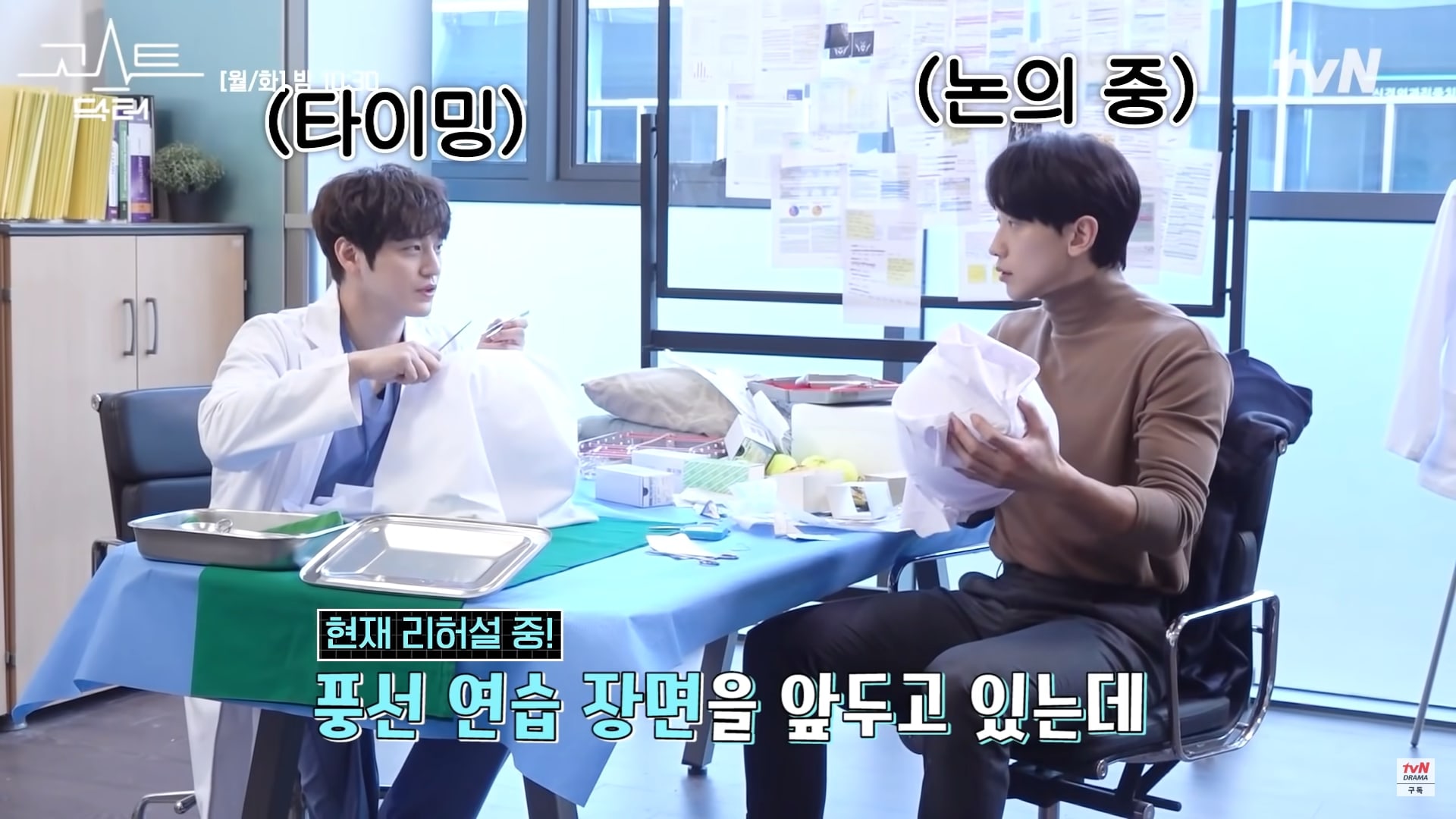 When it comes time for the real deal, Rain stands by Kim Bum giving him a list of directions until he gives up and says, “Do it or don’t do it, I don’t care.” He ends up so satisfied with himself that he laughs at his own joke. Kim Bum shows off his suture technique, which has improved thanks to all of his previous practice.

Kim Bum then practices CPR for a tense emergency scene, but he becomes choked up with tears during rehearsal and tries to hold back tears as he says, “I’m already starting to cry.” During a later scene with Son Na Eun, Kim Bum leans back in the chair and complains, “I want to go home.” His delivery was so realistic that the director cut in to say, “You can’t reveal the way you really feel.” Son Na Eun laughs, “You let out your heart’s desire.”

The making-of video wraps up as Kim Bum films a scene where his character is hit by a motorcycle. Afterwards, staff come running up to jokingly check on him and express their concern, which makes him smile sheepishly. Rain then appears on set and learns his action moves in less than five minutes, leading to a perfect take moments later.

Check out the full behind-the-scenes video below!

Check out “Ghost Doctor” with subtitles below: