Here Are All 10+ Movies That Inspired K-Drama “Our Beloved Summer” : Entertainment Daily 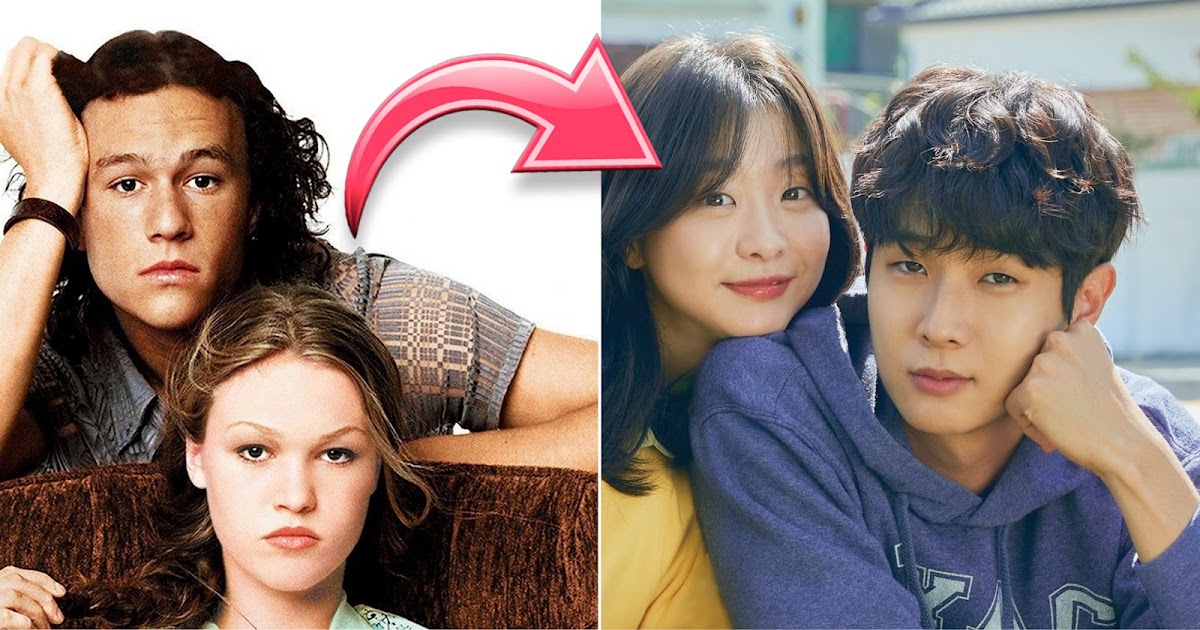 K-Drama Our Beloved Summer begins and ends around a documentary that brought together its two leads Ung (Choi Woo Shik) and Yeon Su (Kim Da Mi). So, each episode’s title references an iconic part of cinema history.
A coming of age, romantic comedy revolving around ex-lovers who broke up with a promise never to meet again. But the documentary they filmed ten years ago gets the fame and they are by compulsion facing camera once more.
— IMDb
“Our Beloved Summer” poster.
While the drama itself is an adaptation of the Webtoon of the same name, there’s no denying that there was certainly some inspiration taken from movies too.
| WEBTOON
Here are all of the inspirations behind the Our Beloved Summer‘s episode titles…
1. “I Know What You Did Last Summer”
As high schoolers, Kook Yeon-su and Choi Ung give a documentary crew a peek into their lives. Ten years later, they’ve gone their separate ways.
— Netflix
Screenshot from Episode 1 | Netflix
The 1997 horror I Know What You Did Last Summer is a cult classic. It stars Jennifer Love Hewitt, Sarah Michelle Gellar and her husband Freddie Prince Jr., and Ryan Phillippe. The film is actually loosely inspired by Louis Duncan‘s novel of the same name.
Four young friends bound by a tragic accident are reunited when they find themselves being stalked by a hook-wielding maniac in their small seaside town.
— IMDb

2. “1791 Days of Summer”
Yeon-su and Ung reunite for the first time in five years when she shows up at his door with a proposal to work together on an art project.
— Netflix
Screenshot from Episode 2 | Netflix
“1791 Days of Summer” references 500 Days of Summer, a 2009 romance film. It stars Zooey Deschanel and Joseph Gordon-Levitt.
After being dumped by the girl he believes to be his soulmate, hopeless romantic Tom Hansen reflects on their relationship to try and figure out where things went wrong and how he can win her back.
— IMDb

3. “10 Things I Hate About You”
Eager to film a follow-up documentary, Kim Ji-ung sets out to persuade Yeon-su and Ung. But getting them to agree proves to be a challenge.
— Netflix
Screenshot from Episode 3 | Netflix
10 Things I Hate About You is a 1999 teen comedy and is based on William Shakespeare‘s The Taming of the Shrew. It stars Julia Stiles, Heath Ledger, and Joseph Gordon-Levitt.
A pretty, popular teenager can’t go out on a date until her ill-tempered older sister does.
— IMDb

4. “The Boy, or the Girl, We Liked Then”
Yeon-su and Ung’s squabbles begin even before the cameras start rolling. Ung refuses to dignify an infuriating plagiarism accusation with a response.
— Netflix
Screenshot from Episode 4 | Netflix
Based on the 2011 Taiwanese film of the same name, You Are the Apple of My Eye is a 2018 Japanese teen romance. They’re both based on the novel Na Xie Nian, Wo Men Yi Qi Zhui De Nu Hai by Giddens Ko, whose literal title is Those Years, We Went After You. The Japanese remake stars Yuki Yamada and Asuka Saito.
In Japan in the early 2000s Kosuke Mizushima is a popular yet childish high school student living a comfortable life. He wants to start a relationship with his classmate, but she’s a serious honors student.
— IMDb

5. “A Secret That Can’t Be Told”
Ji-ung recounts how he and Ung became friends in their childhood. Yeon-su wants to apologize to Ung, but can’t quite bring herself to do it.
— Netflix
Screenshot from Episode 5 | Netflix
The episode’s title is inspired by 2007 Taiwanese film called Secret (also known as The Secret That Cannot Be Told). It stars musician Jay Chou, and he also served as a co-writer.
Ye Xiang Lun, a talented piano player is a new student at the prestigious Tamkang School. On his first day, he meets Lu Xiao Yu, a pretty girl playing a mysterious piece of music.
— IMDb

6. “Pride and Prejudice”
Ung wakes up on the morning of the live drawing show with a few gaps in his memory. Watching him at work, Yeon-su sees an unfamiliar side of him.
— Netflix
Screenshot from Episode 6 | Netflix
Pride & Prejudice is a 2005 movie adaptation of the Jane Austen novel of the same name. It stars Keira Knightley and Matthew Macfadyen.
Sparks fly when spirited Elizabeth Bennet meets single, rich, and proud Mr. Darcy. But Mr. Darcy reluctantly finds himself falling in love with a woman beneath his class. Can each overcome their own pride and prejudice?
— IMDb

7. “Catch Me If You Can”
Ung and Yeon-su attempt to run away from having to see each other, but wind up in the same place anyway. NJ stands up to her cyberbullies.
— Netflix
Screenshot from Episode 7 | Netflix
This is referencing the 2002 biographical crime drama Catch Me If You Can, starring Leonardo DiCaprio and Tom Hanks.
Barely 21 yet, Frank is a skilled forger who has passed as a doctor, lawyer and pilot. FBI agent Carl becomes obsessed with tracking down the con man, who only revels in the pursuit.
— IMDb

8. “Before Sunset”
A forced vacation commences for Yeon-su and Ung when the documentary crew traps them at a mountain retreat. Awkward tensions run high between the pair.
— Netflix
Screenshot from Episode 8 | Netflix
This refers to the 2004 romance drama Before Sunset. Ethan Hawke and Julie Delpy starred in the film and also served as writers on the screenplay.
Nine years after Jesse and Celine first met, they encounter each other again on the French leg of Jesse’s book tour.
— IMDb

9. “Just Friends”
When she doesn’t hear from Ung after their return from the retreat, Yeon-su decides to confront him. He has a disorienting response for her.
— Netflix
Screenshot from Episode 9 | Netflix
While this could refer to the 90s drama Just Friends, the 2005 Christmas romcom Just Friends seems to be more likely. It stars Ryan Reynolds and Amy Smart.
While visiting his hometown during Christmas, a man comes face-to-face with his old high school crush whom he was best friends with — a woman whose rejection of him turned him into a ferocious womanizer.
— IMDb
| New Line Cinema
10. “Hello, My Soul Mate”
With his mother back in town, Ji-ung stops going home so he can avoid seeing her. Watching NJ and Ung go on a date vexes Yeon-su to no end.
— Netflix
Screenshot from Episode 10 | Netflix
This seems to reference the 2021 Korean drama Soulmate (also known as Hello, My Soulmate), a remake of the 2016 Chinese movie SoulMate. It stars Woo Seok Byeon and Kim Da Mi, the same lead actress from Our Beloved Summer.
‘Hello, My Soulmate’ is a coming-of-age story where two friends first meet at 13 years old and spend the course of 14 years remaining close and sharing experiences in both friendship and romance.
— IMDb
| IMDb
11. “Our Nights Are More Beautiful Than Your Days”
Ahead of the final day of filming, gossip about Ung and NJ causes a stir. Ji-ung receives pointed advice about his documentary edit.
— Netflix
Screenshot from Episode 11 | Netflix
This title is based on the English title of the 1989 French romantic drama Mes nuits sont plus belles que vos jours. This translates to My Nights Are More Beautiful Than Your Days. The film stars Sophie Marceau and Jacques Dutronc.
A story of doomed passion by two mortally ill people: he is physically, she is mentally.
— IMDb

12. “Begin Again”
For Ung and Yeon-su, a new beginning is equal parts sweet and clumsy. When NJ bumps into Ji-ung, she invites him out for a drink.
— Netflix
Screenshot from Episode 12 | Netflix
This is a clear reference to the 2013 dramedy Begin Again. It stars Keira Knightley, Mark Ruffalo, and Maroon 5‘s Adam Levine.
A chance encounter between a down-and-out music-business executive and a young singer-songwriter, new to Manhattan, turns into a promising collaboration between the two talents.
— IMDb

13. “Love Actually”
After soliciting dating advice from a co-worker, Yeon-su acts out of character in front of Ung. Meanwhile, Ji-ung takes some time to himself.
— Netflix
Screenshot from Episode 13 | Netflix
Another obvious title is, of course, the Christmas classic Love Actually. This Our Beloved Summer episode premiered just after the holiday season. The film stars an all-star cast, including Hugh Grant, Liam Neeson, Emma Thompson, and Colin Firth.
Follows the lives of eight very different couples in dealing with their love lives in various loosely interrelated tales all set during a frantic month before Christmas in London, England.
— IMDb

14. “Life Is Beautiful”
Ung asks Yeon-su a question that’s difficult for her to answer. As Lee Sol-i deals with an unwanted surprise in her bar, Go Eun-ho happens to swing by.
— Netflix
Screenshot from Episode 14 | Netflix
This is another great classic. This episode’s title takes from the 1997 Italian drama La vita è bella (Also known as Life Is Beautiful). The film stars Roberto Benigni and Nicoletta Braschi.
When an open-minded Jewish waiter and his son become victims of the Holocaust, he uses a perfect mixture of will, humor, and imagination to protect his son from the dangers around their camp.
— IMDb

15. “Three Idiots”
A noticeably down Ji-ung pours himself into his work instead of going home. Ung waits for Yeon-su to come and see the final night of his art exhibit.
— Netflix
Screenshot from Episode 15 | Netflix
This is probably a reference to the 2009 Hindi-language coming-of-age dramedy 3 Idiots. It stars Aamir Khan, Sharman Joshi, and Madhavan.
Two friends are searching for their long lost companion. They revisit their college days and recall the memories of their friend who inspired them to think differently, even as the rest of the world called them ‘idiots’.
— IMDb

16. “Our Beloved Summer”
Ready to pursue his next dream, Ung sets his sights on studying overseas. When he asks Yeon-su to join him, she has a tough decision to make.
— Netflix
Screenshot from Episode 16 | Netflix
The K-Drama concluded with the final episode titled “Our Beloved Summer,” the name of the drama itself. This is because it was followed by a special broadcast, Our Beloved Summer: The Movie, just as Korean fans predicted.
Source: IMDb and @kdramatreats
Share This Post