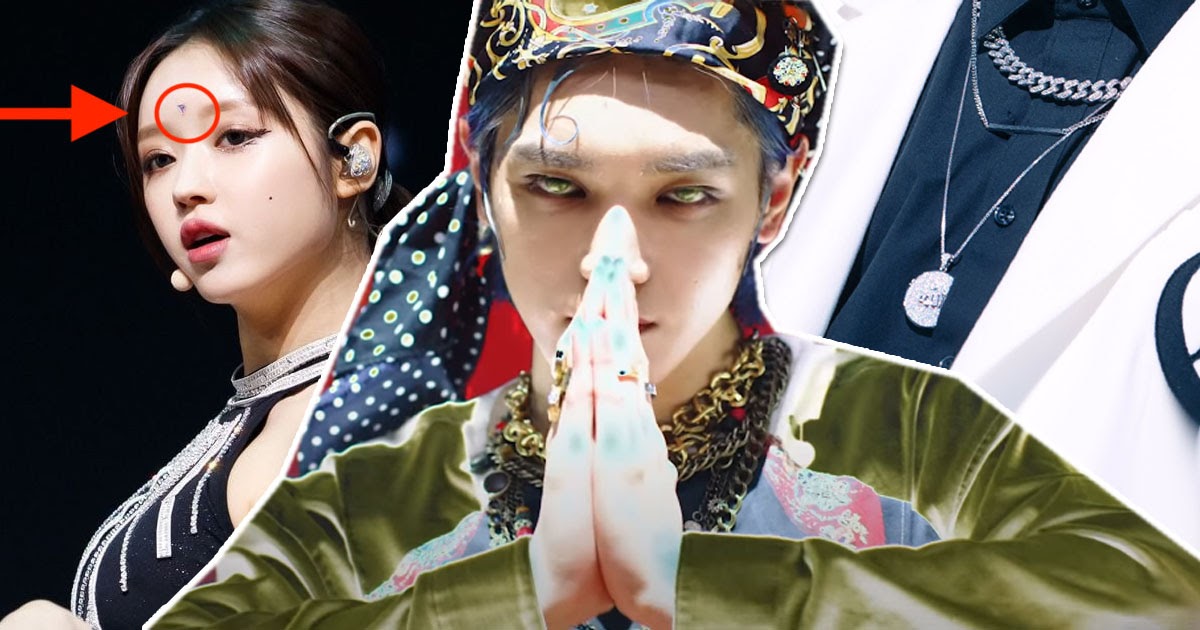 Sometimes there’s a fine line between cultural appreciation and cultural appropriation. Fans continuously reached out to K-Pop idols and their agencies to discuss the difference, hoping to enact change. Although progress has been made, within the past two years some poor styling and marketing choices have still crossed into cultural appropriation territory, according to fans.
1. Jake’s necklace
CJ ENM and HYBE‘s music label BELIFT LAB is facing backlash for less than stellar styling. When ENHYPEN performed on Inkigayo, Jake wore this necklace.
ENHYPEN’s Jake
The necklace has the name of Allah (God in Islam) written on it in Arabic. Since Jake is not Muslim, Muslim ENGENEs believe it was not appropriate for ENHYPEN’s stylists to include this jewelry as part of his look. To Muslims, “Allah” is a sacred word, not an accessory.

Why is jake from enhypen wearing a necklace that says Allah(god) on it😭 this is so disrespectful????? ALLAHS NAME IS NOT AN ACCESSORY, RELIGION IS NOT AN ACCESSORY pic.twitter.com/yjtwHGhdJC
— Stayc (@megshottie_) January 29, 2022

The above photo for Jungkook’s “MIKROKOSMOS MOOD LAMP” features an “indoor tent” that Indigenous ARMYs say is, in fact, a teepee (also known as tepee and tipi).
“Seven illuminated teepees are to be raised on the south end of Peets Hill in Bozeman, Montana from October 8 to 18 in celebration of Indigenous Peoples Day.” | Mountain Time Arts via Indian Country Today
The floor of the tipi represents the earth on which we live, the walls represent the sky and the poles represent the trails that extend from the earth to the spirit world (Dakota teachings). Tipis hold special significance among many different nations and Aboriginal cultures across North America.
— BikeHike

Fans pointed out that the appropriation of Indigenous culture has become so commonplace that many don’t recognize it when they see it.

very disappointed… again. honestly i feel defeated. most ARMY don’t care about CA – especially when its CA of Indigenous ppls. so they won’t even bat an eye or question this photo 😔. https://t.co/6j0oJ0de5i
— Ojistoh⁷ (H) (@BeadsTS) January 21, 2022

3. NCT U’s “Make A Wish (Birthday Song)” Promotions
SM Entertainment came under fire for marketing NCT U merchandise that appropriates Islamic culture, according to fans.
Taeyong | SMTOWN/Youtube
#SMStopDisrespectingIslam trended on Twitter shortly after new merch items for NCT U‘s song were unveiled. Some fans took issue with the merch’s mosque-like designs and an ornate cube that closely resembles a sacred place of worship: The Kaaba.
| @SMTOWNANDSTORE/Twitter

my tl is filled with people asking about the nct situation this is their new merch as you can see they used the design of the mosque and that little cube thats the kaabafor performance set they did this people spoke up but they did not do anything about it and now this pic.twitter.com/0y0z43Ya9l
— tete day🐻⁷ (@bngtnshahad) December 11, 2020

The set for NCT U’s “Make A Wish (Birthday Song)” MV also received backlash for resembling mosques.
| SMTOWN/Youtube
4. LOONA’s “PTT (Paint the Town)” Styling
LOONA‘s “PTT (Paint the Town)” teaser became the subject of an appreciation vs appropriation debate. Some fans felt that two headpieces from the “&3” teaser appropriated Indian culture. One was worn by Hyunjin…
LOONA’s Hyunjin | loonatheworld/YouTube
…and the other by Vivi.
LOONA’s Vivi | loonatheworld/YouTube
These headpieces are similar to two traditional South Asian jewelry pieces: the maang tikka and matha patti.
| Banga Studios
| Weddings Only
Both headpieces have ties to Indian bridal traditions and Hinduism.

seem like a pretty pendant, it isn’t. matha pattis and maang tikkas hold a special meaning to desis, since they come from hinduism. in hinduism there are a few main centers of energy in our bodies, which we call the chakras. these chakras create a continuous flow of energy
— haseul thinker (@thinkshaseul) June 24, 2021

Some fans, however, felt BlockBerry Creative was showing appreciation for Indian culture. Prior to releasing the teaser, the company announced that “PTT (Paint the Town)” would have Bollywood (Hindi cinema) influences.
| loonatheworld/YouTube
5. OH MY GIRL’s KCON:TACT 2020 SUMMER Performance
During a special stage at KCON:TACT 2020 SUMMER, YooA‘s styling included a jewel in the middle of her forehead that looked similar to a Bindi. In Hindu culture, a red dot in the middle of the forehead signifies a woman’s married status and wards off bad luck.
YooA | WM Entertainment
Like LOONA’s Vivi, Mimi wore a jeweled headpiece that resembled a matha patti.
Mimi | WM Entertainment
6. NTX’s “Kiss the World” Concept Photos
Victory Company‘s rookie boy group NTX faced backlash for cultural appropriation shortly after their debut. These concept photos for “Kiss the World,” the title track on Full of Lovescapes, featured the members dressed in outfits to represent various countries, including Korea.
| @NTX_Victory/Twitter
Fans, however, took issue with traditional cultural outfits from other countries being worn as “costumes.”
| @NTX_Victory/Twitter
| @NTX_Victory/Twitter
Victory Company later addressed these concerns in a statement.
We’ve carefully looked through your comments. First of all, we’re sorry for causing our fans discomfort.
Traditional clothes and fashion styles from worldwide nationalities are used simply to express a concept of the new music, ‘KISS THE WORLD’ of NTX.
Please understand the fact that neither offensive act nor intentional purpose were put in through the process.
Looking through your comments; now our company has realized that we should be more careful through the preparation process. We’ll be much more cautious about our future researching materials; so we can assure similar problems will not happen ever again. In addition, we’ll thoroughly prepare in advance for our ideas of NTX concepts at a future date.
We appreciate your concern. Thank you.
— Victory Company
7. WOODZ’s Headdress
Yuehua Entertainment found itself in hot water after WOODZ wore a traditional Plains Natives’ headdress in this concept photo.

The backlash drew mixed reactions from Korean and international fans, some of whom defended the styling choice as cultural appreciation.