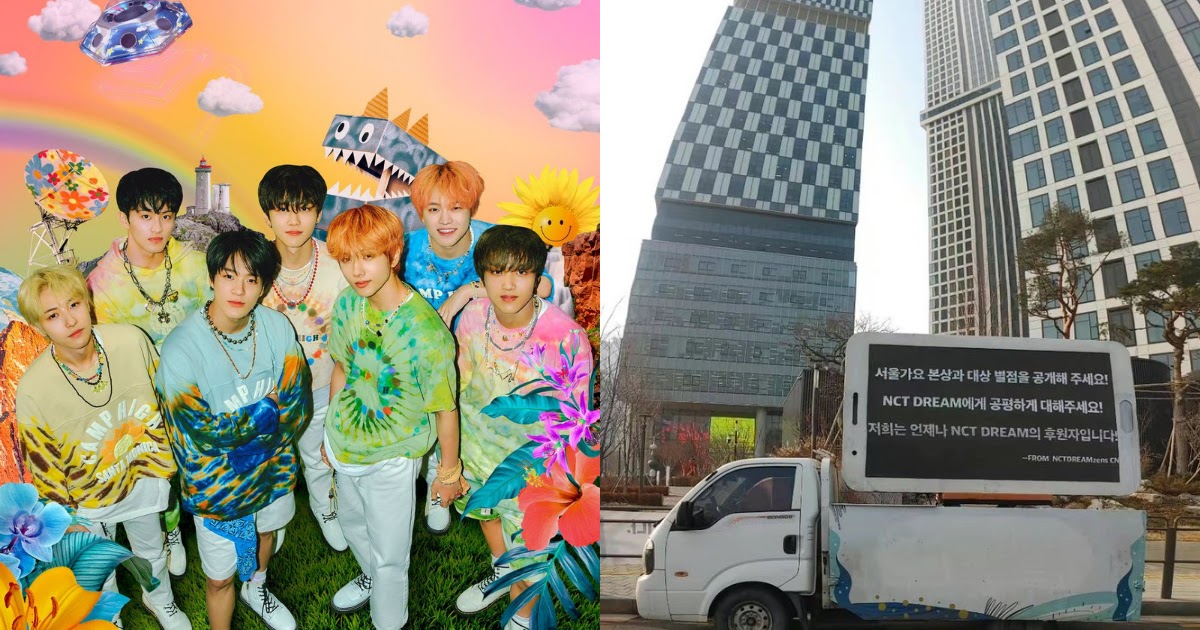 In the aftermath of the 2021 Seoul Music Awards, some fans have not been satisfied with the results. Having had a stellar year of achievements, NCT Dream walked away with the Best Album award for the year. Fans were not pleased as they were convinced that the band deserved more than just that.
According to calculations for releases in 2021, NCT Dream had surpassed even IU and NCT 127 with “Hot Sauce”. Fans were puzzled as to why NCT Dream was not given the Bonsang award at the show. In order to be nominated for the Daesang, the grand prize of all, an artist needs to be nominated for the Bonsang first.

As such, a group of fans teamed up to send support trucks to SM Entertainment. Their goal is the reveal the results of the scores for Seoul Music Awards, as well as to demand for better treatment of the artist.
| @NCTDREAMBAR/Twitter
Truck Banner Content
Please reveal the scores for SMA’s Bonsang and Daesang!
Treat NCT Dream fairly!
We will always support NCT Dream!
– FROM NCT Dreamzens CN
— @NCTDREAMBAR

The trucks have been circling the SM Entertainment building in Seongsu, and will continue to do so from January 26 to 28, 2022.
| @NCTDREAMBAR/Twitter
Mistreatment and unfair treatment has always been a sore spot for NCT Dream fans. Fans believe that the group deserves more than what they have been given based on their stellar results.
| @NCTDREAMBAR/Twitter
While some fans are supportive of this measure…

NCT DREAMzens have the right to protect what NCT DREAM should get. Instead of judging us, take care of youself will be better. https://t.co/Vgq5rkXwpn
— gwynnie (@gwynnie66053868) January 26, 2022

…others have been calling it out as a blip to NCT Dream’s name.

I think this will impact to the dreamies instead of SM. I know how SM being shit to them but please calm down and think about it again. Don’t push dreamies into the difficult situation.
— ffeoron6️⃣8️⃣🍀 (@bfedenh17) January 26, 2022

What do you think?