“All Of Us Are Dead”‘s International Advertisement Making Headlines For Its Gruesome Method : Entertainment Daily 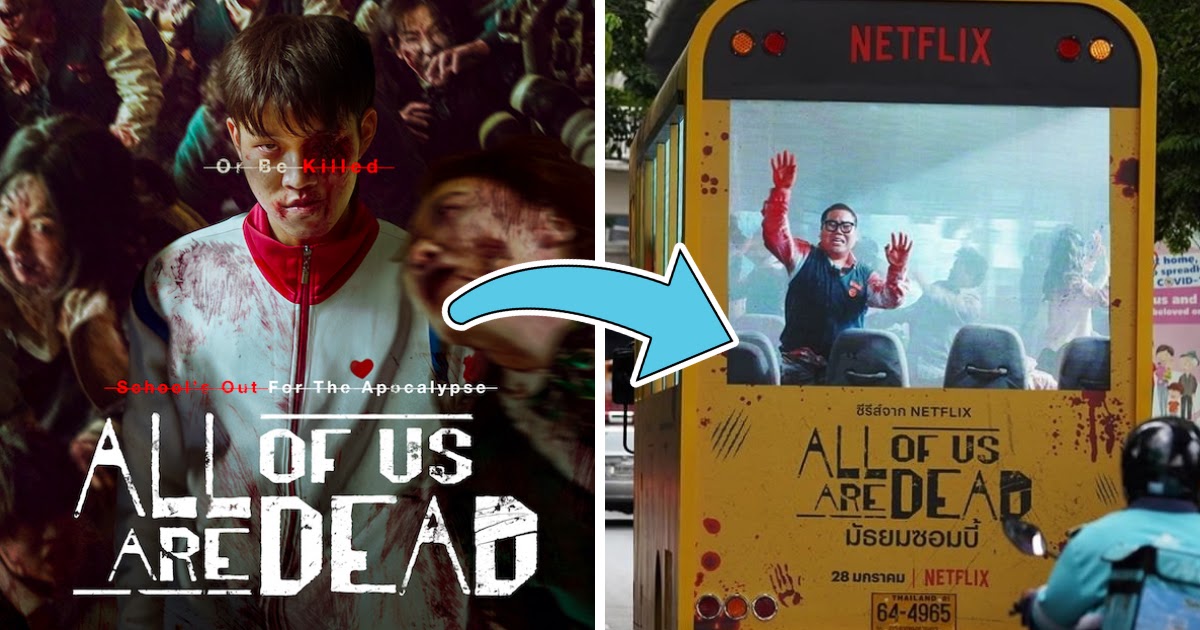 Netflix is on a roll with its Korean productions, as Squid Game, Hellbound, and Single’s Inferno dominated the streaming platform the past few months. As global Netflix viewers anticipate more exciting Korean releases for 2022, there has been one particular series that has been gaining a lot of positive momentum—and it’s none other than the upcoming zombie thriller, All Of Us Are Dead.
Poster for “All Of Us Are Dead” | Netflix
The horror series has been slated to be the next big Korean mega-hit following Squid Game‘s global 2021 success. As the highly anticipated premiere slowly approaches, Netflix’s marketing team has been busy promoting the zombie K-Drama. In particular, there has been one marketing tactic that has started to go viral online for its on-brand method.
Still from “All Of Us Are Dead” | Netflix
Thai netizens have started to share photos of the grisly All Of Us Are Dead promotions that have been used within their country, and it didn’t take long for these pictures to go viral in South Korea.
The photos featured a truck painted yellow in an effort to mimic the look of a school bus. However, it became evidently clear with the splotches of blood and the grotesque scene “inside” the bus that this was no ordinary marketing scheme.
Advertisement for “All Of Us Are Dead” as seen in Thailand | theqoo
The Netflix marketing team utilized an LED screen in place of actual windows to create an even biggest impact for Thai citizens. The images in the bus’s “windows” were moving video clips of people who looked to be stuck inside the vehicle.
| theqoo
The images were constantly changing, giving an even fuller effect for onlookers on the streets of Thailand.
| theqoo
One particular Thai netizen shared a video clip of the All Of Us Are Dead “school bus” billboard, which showed the full effect of the advertisement.
Your browser does not support video.
As these photos began to go viral in different Korean discussion boards, K-Netizens shared their thoughts on the intense marketing strategy used by the Netflix team. While many agreed that it was a bit “terrifying,” the tactic was definitely impactful.
| theqoo

“This idea is amazing.”
It’s nice because it’s not completely realistic. You know how there’s some advertisements that go too far with the realism and it makes you get chills.”
“I feel like if you see in person, the graphics aren’t actually that shocking.”
“This is terrifying.”
“Scary.”
“It is a little scary, but it’s definitely impactful.”
“Wow, this is f*cking amazing. I want to watch it.”

| Netflix
The zombie apocalyptic series puts a spin on the cult favorite genre by taking place in a high school. A zombie virus outbreak finds itself at one specific high school, as the students try to navigate life or death situations while attempting to escape the school.
| Netflix
All Of Us Are Dead will be premiering worldwide on January 28, 2022 so be on the lookout for its upcoming release on the streaming platform.
In the meantime, check out the intense and thrilling trailer down below.