10 Male K-Pop Idols Who Are Artistically Talented Outside Of Music : Entertainment Daily 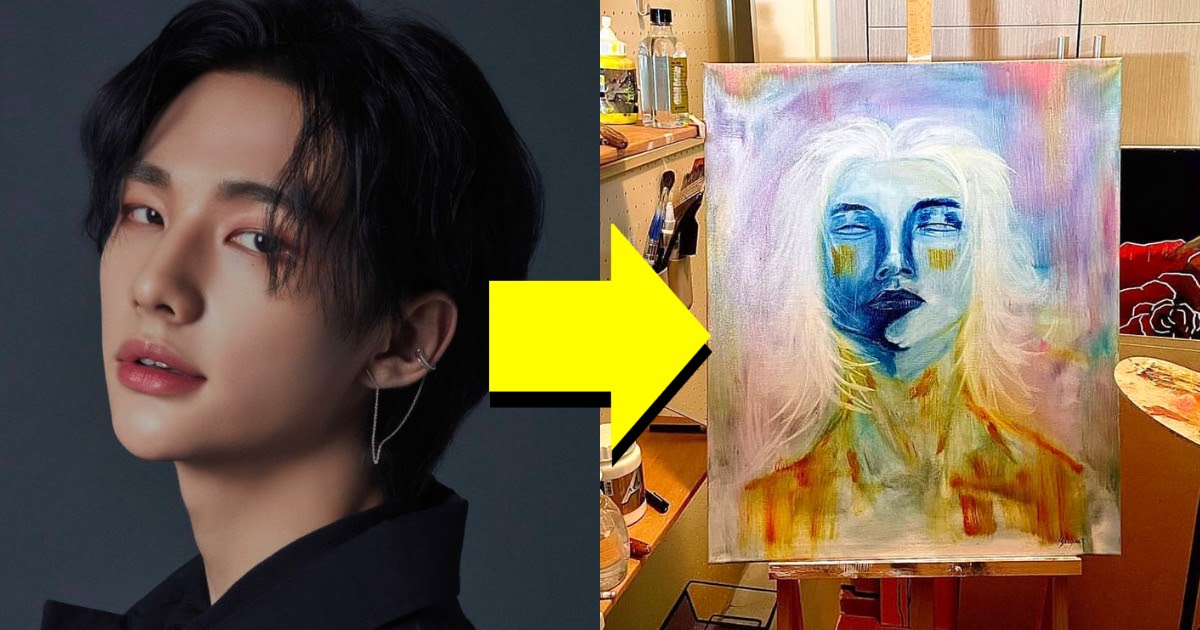 When K-Pop fans talk about their favorite idols being multi-talented, most often they’re talking about their skills in a musical sense. However, there are numerous idols that have talents in styles of art outside of music! Here are 10 different male K-Pop idols who have shown just how incredible they are at painting, drawing, clothing alteration, and many other forms of art.
1. Jungkook (BTS)

Not only is Jungkook the golden maknae of BTS, but he is an incredibly skilled painter and designer as well! He has worked in a variety of mediums, for pencils to paints to even decorating a mask for a BTS exhibit.

ATEEZ’s leader and captain Hongjoong is a fashion icon, and part of his unique style is due to his love for reforming clothing! He has worked on a variety of different pieces, from bags to jackets and shoes and pretty much anything you can think of.

3. Hyunjin (Stray Kids)
JYP Entertainment
Though Hyunjin started drawing only about a year ago, he has made quick progress in his skills! He has since moved on to painting and digital art as well, and even has his own studio to work on his art in.

it’s been one year since hyunjin shared his first drawing, and we are so lucky to witness his incredible growth as an artist.
— this is a short thread of hyunjin’s art journey #hyunpic 🎨 pic.twitter.com/NlbSNQAIPT
— dolly (@hwangride) January 24, 2022

Though he has since deleted the Instagram post, Eunwoo recently posted a video of himself painting and, based on the results of his work, he definitely has a skill for the art!

Ten’s elegance in dance is easy to see in his artistic abilities as well. In fact, his work is admired so much that it has even been used on WayV official merch and clothing designs!

Ten isn’t the only idol whose art has appeared in his group’s official designs! Asahi used his artistic abilities to create a poster for TREASURE’s B-side track, “Orange”, which he also composed.

The8 has created many beautiful paintings and drawings. Known for his unique fashion and ethereal dancing abilities, his whimsical art style definitely suits him! The hashtag #8painting is even used on social media for his artwork.

Not only have fans praised Mino’s artistic abilities, but he has even had his own art exhibit for his work! He goes by the name Ohnim for his artistic endeavors, his work can also be seen on his albums, and he is currently working on an art collaboration with luxury whiskey brand Glenfiddich.

Kino is another idol who mixes his skills in music and art together! His work was used for PENTAGON’s WE:TH online cover, which ended up getting displayed at the 2021 Korea Drama Hallyu Arttrainer Exhibit. It was originally a painting he did in his spare time for Hui!

And finally, when it comes to art and crafting, Joshua seems to dabble in a variety of mediums. From pottery to bracelet-making to painting and all kinds of other things, it seems that he has a knack for any artistic endeavor that he attempts!

its so nice how when joshua puts his heart into something he really pours his all and entire effort into it .. like in pottery (and his other hobbies) he really takes the time to master it despite being a beginner & thats <3 pic.twitter.com/tgg39oThiP
— ary (@shuailormoon) August 29, 2021