HyunA Gains Attention For The Unique Place She Stored Her Speech, And Here’s Why Netizens Are Comparing It To Ariana Grande : Entertainment Daily 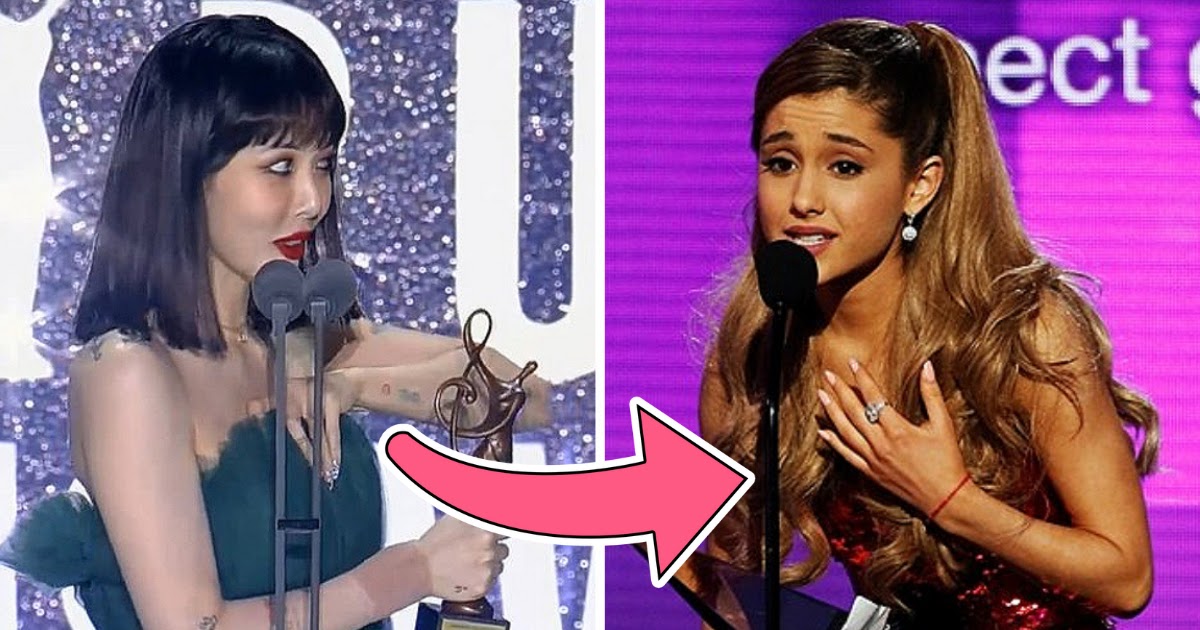 Since debuting in K-Pop, idol HyunA has always gained attention for breaking the norms of traditional Korean society and playing by her own rules. Even in the harsh world of K-Pop, HyunA has never been one to follow the rules, and it is one of the many things netizens have loved the most about her.
HyunA | @hyunah_aa/ Instagram
Recently, HyunA gained attention for her appearance during the Seoul Music Awards. During the event, HyunA wowed fans with her performance of her track “I’M NOT COOL” during the show…
Your browser does not support video.
And even had fans talking about her epic kiss with fellow idol and boyfriend DAWN that had netizens swooning.
Your browser does not support video.
Yet, another moment caught the attention of fans. Alongside winning her own award for best Best R&B/Hip Hop artist, she also collected the Bonsang award for her friend Heize who was unable to attend the ceremony.
| @hyuna_fb/ Twitter
Yet, fans noticed something hilarious during the speech. As HyunA was getting ready to read the speech that Heize must’ve given to her, it seemed as if the idol had a unique place of storing the speech.
While most idols choose pockets or hold them while going on stage, HyunA had her own preference and her boobs. Fans couldn’t get over the fact that as she walked on stage and stepped in front of the microphone, HyunA reached into her dress and pulled out the piece of paper.
Your browser does not support video.
As expected, netizens on social media couldn’t get enough when it happened. Considering how conservative Korea is and the expectations set for huge events like this, it was a huge thing for HyunA to do and was definitely “Queen” behavior.

Yet, in particular, one netizen cemented that this behavior is for Queens only when they compared it to a moment from another huge award show. During the 2013 American Music Awards, Ariana Grande won the award for the best new artist.
Your browser does not support video.| American Music Awards/ YouTube
Yet, when she got on stage, Ariana did something very similar to HyunA as she explained, “My mom made me this thing, and I have it in here so that I don’t forget anybody,” before taking a piece of paper from her dress with the speech on it.
Your browser does not support video.| American Music Awards/ YouTube
Of course, when the initial tweet sent by a netizen was shared, others couldn’t get enough of the comparisons noting that both artists are truly unique and not afraid to break some rules.

HELP HYUNA KEPT THE NOTE ON HER BOOBIES 😭 SHE PULLED AN ARIANA GRANDE SPEECH pic.twitter.com/zMaxnzLtFB
— eyza is proud of nct ! (@NE0V3LVET) January 23, 2022

Once again, HyunA has proved why she is so iconic because, whereas it might not have been so odd in America, it would not have been something netizens expected in Korea.
However, HyunA going against tradition has always made her unique, and it isn’t surprising that fans love her so much. You can read more about HyunA going viral at the Seoul Music Awards below.
HyunA And DAWN Set Fire To Seoul Music Awards By Sharing Sweet Kiss On Stage